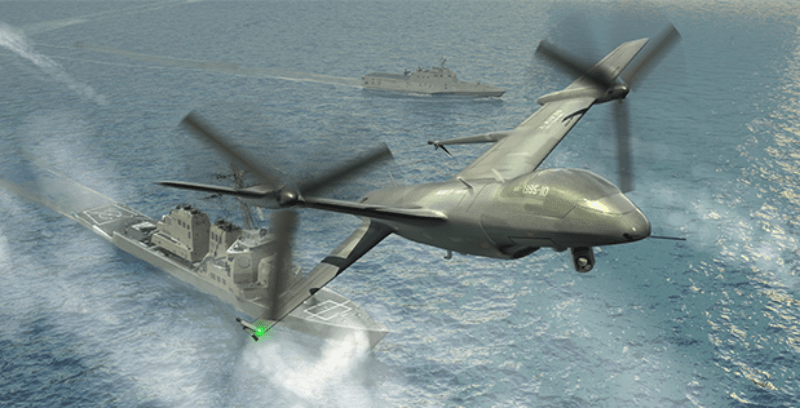 The US Marines have ditched their plan to field a very large drone on amphibious ships, instead breaking the four-year-old MUX program into a family of systems that will include a very large land-based unmanned aerial vehicle and a medium-sized one for shipboard operations.

Deputy Commandant of the Marine Corps for Aviation Lt. Gen. Steven Rudder told USNI News today after a hearing that it became clear as the service moved forward with the program that it couldn’t get the endurance it needed for high-end missions like airborne early warning and communications relay with the kind of air vehicle design that would be able to launch vertically off a ship’s helicopter deck.

“I think what we discovered with the MUX program is that it’s going to require a family of systems. The initial requirement had a long list of very critical requirements, but when we did the analysis and tried to fit it inside one air vehicle,” they realized they had competing needs, Rudder said.
“With a family of systems approach, my sense is we’re going to have an air vehicle that can do some of the requirements, some of the higher-end requirements, potentially from a land-based high-endurance vehicle, but we’re still going to maintain a shipboard capability, it just may not be as big as we originally configured.”

The MUX program was intended to help the Amphibious Ready Group and Marine Expeditionary Unit (ARG/MEU) team operate more like a carrier strike group. With the F-35B Joint Strike Fighter coming online at that time, the major gap between a carrier air wing’s capabilities and what the Marines could bring to the fight was an airborne early warning capability the Navy has in its E-2D Advanced Hawkeye. MUX would fill that role, the Marine Corps envisioned.

Program officials realized they had a huge task ahead of them with so many separate missions, though, and early industry talks showed it may become cost-prohibitive. The seven missions were later sorted into two tiers of priority.

Still, as Rudder said, it became clear that those higher priority missions were incompatible with shipboard launch and recovery.

“Power output and weight capacity, obviously you get more weight and power output with a ground-based system with a longer runway, expeditionary runway, than you can coming vertically off the back of a ship. Shipboard compatibility continues to be a challenge for all our air vehicles,” Rudder said.

He made clear the Marines weren’t ruling out the idea of doing a Group 5 UAS on an amphibious ship in the future – but he said Commandant of the Marine Corps Gen. David Berger wants to see UAVs on ships soon.

“In the next 10 years, the quickest way – the commandant wants to go quick on this – this quickest way will be some sort of land-based high-endurance that can be based and still be able to provide the surface force, the amphibious force the capabilities that we would call ‘quarterback,’ or some sort of node that can provide 24 hours on station time, it will have all the networking and early warning and electronic warfare capabilities that they require for that type of thing,” Rudder said.

Rudder noted the Navy and Marine Corps operate the small fixed-wing RQ-21 Blackjack UAV from ships using a pressurized air catapult and a “Skyhook” recovery system, and they also operate the MQ-8 Fire Scout rotary-wing UAV. RQ-21 is a Group 2 UAS, and MQ-8 is a Group 4.

As for the shipboard variant of the Marines’ upcoming program, “it’s probably RQ-21-plus or some sort of Group 3, Group 4 capability, but not a larger (Group 5) air vehicle that does everything,” Rudder said.

Berger himself alluded to upcoming changes in the MUX program in January. He said in response to an audience question during a talk that the many missions MUX was expected to carry out left the program “wrapped around the axle.”

“MUX is a great example of how to pile on 15 requirements and just burden yourself in them. Because everybody has one more thing – I’d just like it to do that, can you write that in? – and then what was this becomes unmanageable and you become buried in your own requirements,” he said while speaking at the Surface Navy Association’s annual conference.
“Now we’re going the other way. … What do we need it to do?”

Even as he criticized the MUX program for getting out of control compared to its original purpose, he also said the Marine Corps hadn’t thought innovatively enough about how to use UAVs in general.

“In the future, we have to get to a point where an aerial vehicle can take off of this ship, any ship, go do its mission, land on that ship over there. Change payloads, launch, do another mission, land on a third ship. We’re nowhere near that right now. We’ve got to get there,” he said.

Hinting at what might replace MUX, he said, “MUX to me is a capability. It’s a truck, a platform, with a payload or multiple payloads.” A future large UAV could be built on a faster timeline with the “truck” approach, and new payloads developed and fielded as needed.

He also said he wanted to spin off the Navy’s MQ-25A Stingray unmanned carrier-based tanker into a family of systems that included a UAV that could operate from an amphibious assault ship that hosts the F-35Bs.

“I think things like the unmanned aerial refuelling – brilliant. We need to move fast on that. If we can launch it from an aircraft carrier or potentially in the future some other kind of variant of it off a big-deck, and it’s unmanned and it can refuel our [tactical aircraft] in flight, why would we not do that? All of us who think above the tactical level, some of your limiting factors fighting at the operation level: tankers. Mobility. So if you can have a group, a family of unmanned tankers, why wouldn’t you think of that?”

Overall, Berger said, “we have to discipline ourselves in terms of requirements; we have to open the aperture in terms of how to employ a capability.”

That Berger’s Marine Corps would cancel its first major foray into unmanned systems is certainly not an indication of his support for unmanned – in fact, since Berger took command in July, the Marine Corps has proposed developing a Long-Range Unmanned Surface Vessel (LR-USV) to support the Expeditionary Advance Base Operations concept, has discussed unmanned vehicles in all domains to support moving logistics to small units in support of EABO, and is even funding development of a remotely operated truck based on the Joint Light Tactical Vehicle that could launch anti-ship missiles from the ground in support of sea control for the Navy/Marine Corps team.