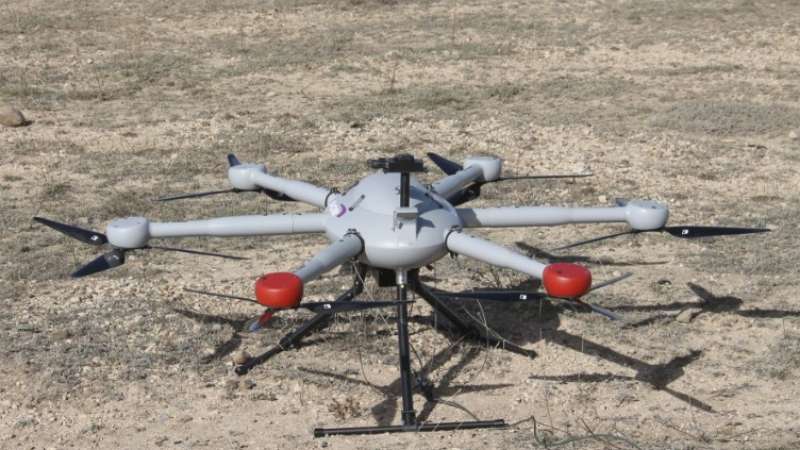 The ASTER-T system was developed using internal research and development funding and has already been exported to a launch customer in the Middle East and Africa (MEA) region to meet a surveillance requirement.

The tethered UAS features a carbon-fibre airframe and is aimed at the civil and military markets. It is described by the company as a “tri-propeller UAS” with a maximum take-off weight (MTOW) of up to 14 kg, including a 4 kg payload.

The sensor package is located underneath the fuselage and comprises a stabilised infrared (IR) camera with a ×2 to ×20 zoom capability and a daylight camera.

The IR camera can detect a human-sized object at a range of 940 m, while recognising at up to 240 m and identifying at 120 m. The daylight camera can perform these tasks at ranges of 5 km, 3 km, and 1.5 km, respectively.

In contrast, larger objects such as vehicles can be detected by the IR camera up to 2.5 km away, be recognised at 600 m, and identified at 300 m, with the daylight camera performing the same tasks at 20 km, 5 km, and 3 km, respectively.

Secure communications, jam-resistant flight control and video data is sent through the tether cable, which supports a maximum altitude of up to 328 ft (100 m), although SCR quotes a typical operating altitude between 230 and 328 ft.

The ground-based power box weighs 23 kg and incorporates a variable torque self-winder to prevent entanglements. The ASTER-T is provided with an onboard battery to ensure a safe recovery in the advent of power loss.