In a project that is unique in Germany, the Frankfurt University of Applied Sciences (Frankfurt UAS), Merck and the drone manufacturer Wingcopter are currently designing and testing the use of delivery drones in cross-location factory logistics.

Pigment samples are flown with a special drone from Merck’s Gernsheim plant to the laboratory in the headquarters of the science and technology company in Darmstadt, around 25 km away, where they have to be analyzed to ensure quality in the ongoing production process. So far, the transport has been carried out by a small van that travels the route between the plants twice on weekdays. The official first drone flight took place successfully on February 5, 2020.

The core task of the “ProGeDa – sample transport between Gernsheim and Darmstadt” project is to evaluate this transport case across plants and to develop a long-term business model from it. The aspects of time saving, sustainability, costs and flexibility are taken into account. The Frankfurt UAS Research Lab for Urban Transport (ReLUT) evaluates it under the direction of Director Prof. Dr. Kai-Oliver Schocke, Professor of Logistics and Production Management at the Department of Business and Law, with the support of Keimer Aviation. ReLUT focuses on the development of economical and ecological solutions for delivery and freight services. The startup Wingcopter developed the special drone, plans and carries out the flight operations and coordinates all aviation law issues. Merck controls the overall process and provides the goods to be transported.

The current project is funded by the Federal Ministry of Transport and Digital Infrastructure with a total of 107,000 euros as part of the funding guidelines for the Modernity Fund (“mFUND”). Wingcopter and the Frankfurt UAS receive this funding. Wingcopter was selected for the project because its drones have all the characteristics for air freight traffic between two or more plants: They can take off and land vertically in the smallest space, but thanks to their swivel rotor mechanism they can also cover larger distances much more efficiently, quickly and quietly than conventional multicopters. 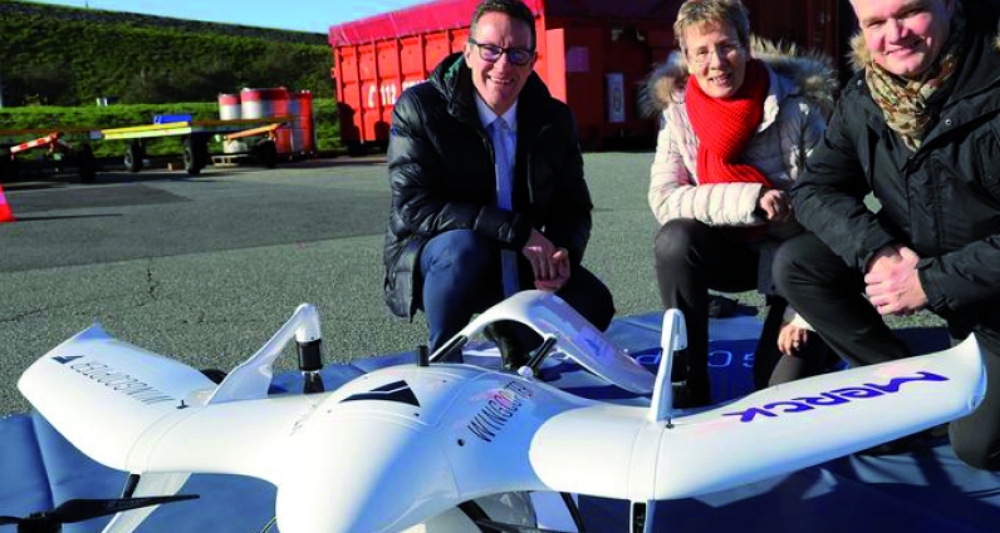 The focus of the project is the determination of an optimal route between the two locations, taking into account various framework conditions (aviation law, environmental protection, suitable takeoff and landing areas, ground processes, costs, etc.). The three cooperation partners assume that transportation by drone will not only prove to be faster and more sustainable, but also less expensive and more flexible.

“With this project, we will demonstrate the sustainability of drone flights for commercial purposes in public space in all three dimensions of sustainability – ecology, economy and social issues. We expect extensive scalability and transferability to other industries, ”says Schocke.

“We have already proven many times that our delivery drones offer a significant advantage over conventional, ground-based means of transport or manned aircraft in various, especially life-saving applications in remote regions of various developing countries. Thanks to this unique project, we can show that this also applies to commercial deliveries in metropolitan areas of industrialized nations. ”

“We are not aware of any other project worldwide in which goods are delivered over such a distance and out of sight by drone in a metropolitan region – via electricity and train routes, motorways and federal highways as well as production infrastructure time. With today’s flight, the project marks a milestone in the history of unmanned aviation and intermodal logistics. ”In addition, the project represents a model for similar projects worldwide with regard to the aviation coordination and approval procedures.

“Not all relevant analytical parameters are implemented in the analytics laboratory in Gernsheim. Special tests are carried out in the laboratory in the Darmstadt plant. Instead of transporting the samples by car, the drone transport offers the possibility of a faster and traffic-free transport option. ”This can save time between one hour and one day. In addition, empty runs and emissions can be avoided.

On the basis of the data obtained during the delivery flights and the survey of the overall processes, the cooperation partners will submit a final report after the completion of the project phase in March 2020. The report is intended to explain the conditions under which the use of drones in factory logistics can be operated in an economically and ecologically sustainable manner. This will result in recommendations, possible further applications and operating concepts.

Before the start of the project, the startup Wingcopter was already part of the House of Logistics and Mobility (HOLM) startup program at Frankfurt Airport and part of the Accelerator program at Merck’s innovation center. During this time, the team worked intensively in the makerspace of the innovation center and further developed its vertically starting and landing drone with the help of the rapid prototyping laboratory.

Through constant exchange with internal employees, the idea of ​​the ProGeDa project came into being, which was supported and supported by the Merck Accelerator and the Innovation Center. The project is an example of the variety of collaborations that startups can initiate as part of Merck’s Accelerator program.