Scientists at Stanford University’s Bio-Inspired Research & Design (BIRD) lab understand that birds can morph the shape of their wings to suit various flying patterns, such as takeoff, landing, and turning, and are trying to transform that masterpiece of evolution into something mechanical.

David Lentink, a trained biologist and aerospace engineer, leads the project and says that unlocking this key ability in birds will shape the future of drone design as we know it.Lentink’s team turned to the humble pigeon in order to discover these secrets of avian flight.

In a report published in Science Robotics, Lentink and his team discovered that pigeons—as well as most other flying birds—do not use individual muscles to control each of their feathers, but instead move them in sync, in groups, with the help of a special ligament.

“What we discovered is that instead of a bird moving each and every feather, controlled by a muscle, they combine the motion of feathers,” he says. “It’s really elegant.”

Knowing this, scientists built a robotic bird, called PigeonBot, to exhibit this property of bird wings. One day, small aircraft like drones could take advantage of this natural design.

Beginning around 2014, Lentink and his lab began studying pigeon biology to understand how their wings could change shape so effortlessly. The team looked at real pigeon cadavers and realized that by moving a bird’s wrists and fingers, the feathers would automatically fall into place.

“Those 25 feathers, their position in the wing simply depends on the angle of their wrists,” Lentink says.

Each of the feathers is connected by an elastic ligament to provide connectivity.

Altogether, the team at Stanford’s BIRD lab discovered that 20 primary and 20 secondary feathers in pigeons are controlled by wrist and finger movements, proving how important bird digits are in steering. Figuring out how birds could transform their shape with such ease was difficult enough, but to replicate that motion in a robot was a whole other issue.

The PigeonBot prototype is called a biohybrid aerial robot because it fuses both biological and artificial elements. To put the working prototype together, the researchers used real feathers from pigeon cadavers but also stuff you’d likely see in other robots. 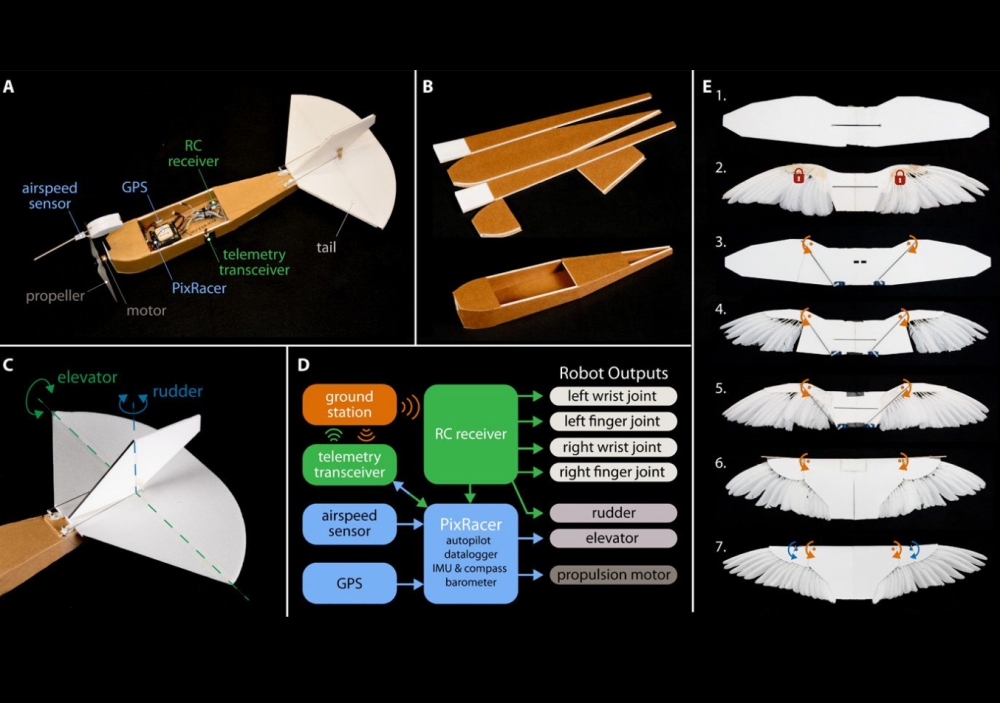 PigeonBot’s body is made up of a single piece of laser-cut foamboard that was folded and glued together. It includes a propeller-driven electric propulsion system to get it up into the air, as well as a big collection of sensors, like GPS, barometers, gyroscopes, magnetometers, radios, three-axis accelerometers, and an autopilot system. The tail also packs in an elevator for longitudinal control and a rudder for lateral control.

But the wings are where it really gets interesting. Lentink says that the team built in a “finger” and “wrist” for the robo-bird and used orthodontic elastic bands to mimic the ligaments in pigeon wings. Altogether, these steps represent PigeonBot’s version of shape-shifting wings in the sky, all based on pigeon biology. 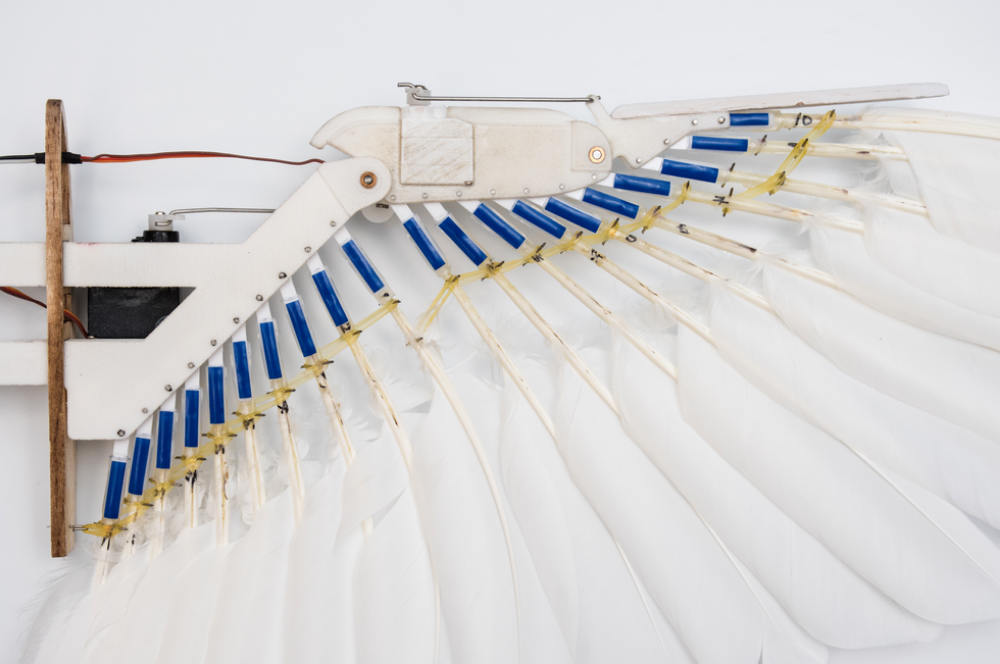 The robot embodies 42 degrees of freedom, which means it can move in 42 independent ways, and PigeonBot can control the position of 40 elastically connected feathers through four servo motors.

Lentink and his team also made an accidental discovery while studying pigeon feathers. As the birds extend their wings, lengthening the bone out straight, there is a risk that as the feathers slide out, they’ll stretch out too far, leaving a gap that is less-than-aerodynamic. Incredibly, though, pigeon features include a latch-hook system to keep in place.

Laura Matloff, one of the co-authors on this second paper published in Science, wanted to understand how pigeon wings used friction. Based on research from the 1960s, Lentink says, there was a previous understanding that birds had hook-like microstructures on their feathers that created friction. That didn’t quite add up because this would slow the birds down.

Lentink’s team noticed that when one feather would slide on top of a feather directly beneath it, the two would clasped together just like Velcro. Once the feathers began to slide too far apart, tiny microstructures that stick out like hooks on top of one feather meet a set of ridges on the underside of the other feather, locking them into place.

It’s nearly impossible to see these tiny structures, even under a microscope. When recorded (in the video above) with the sound amplified, the feathers make a sound just like Velcro. 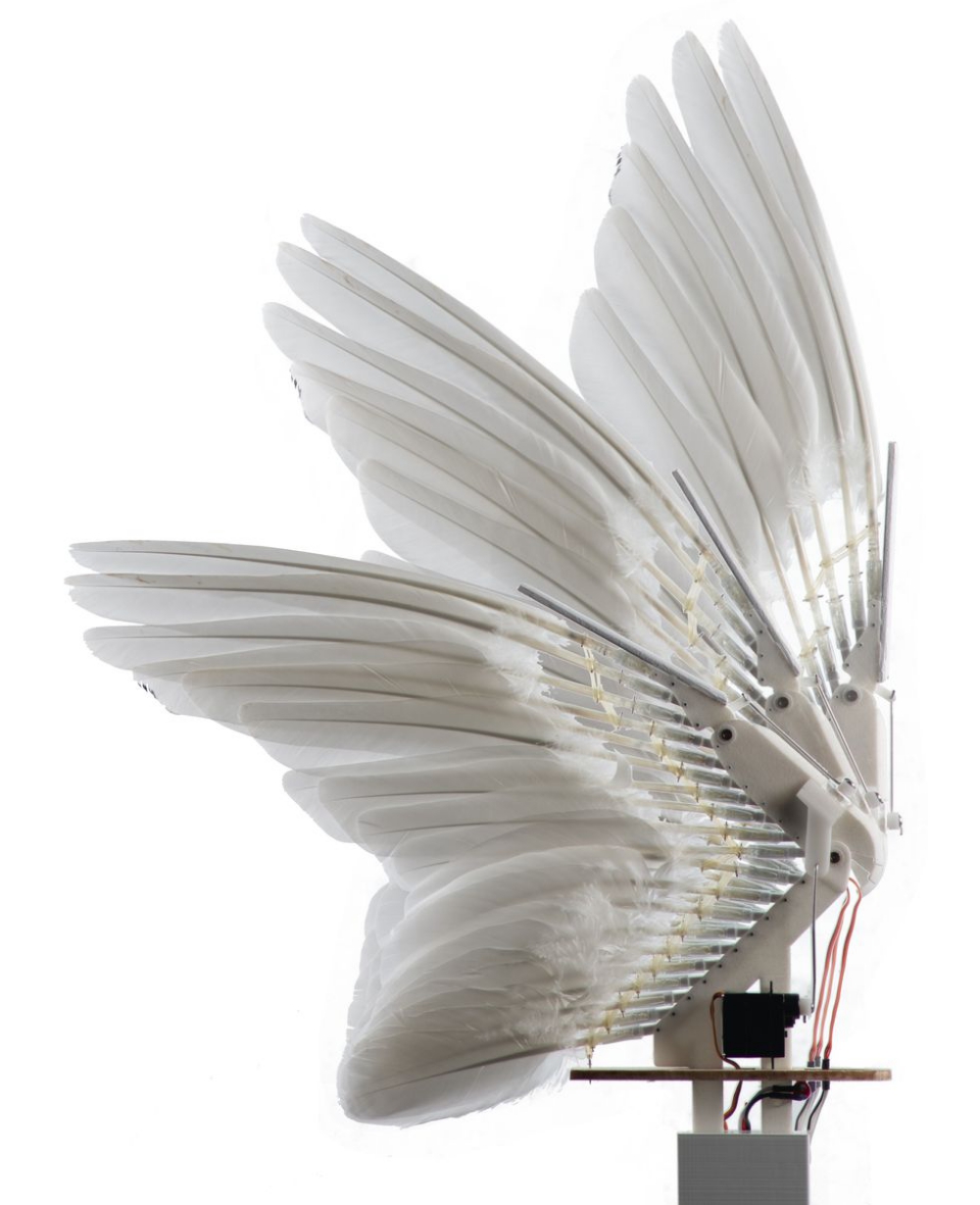 This same property is found in birds of all sizes, he says, including the California Condor, which grows to have the largest wingspan of any North American bird, at nearly 10 feet. The exception is in silent fliers, like barn owls, whose feathers have evolved to make sounds that are 40 decibels more quiet than those of pigeons.

PigeonBot is the most advanced bird-like robot that’s ever been built, but its creation could have far-reaching impacts in the design of future aircraft.

Today’s airplanes and military aircraft can already change shape like pigeon wings. During takeoff and landing in passenger aircraft, pilots can extend a set of flaps on the wings to create more lift. In stunt planes, pilots can create a “snap roll,” or a 360-degree horizontal spin, by stalling one wing of the plane.

Still, it’s not so easy to borrow from the world of impressive fliers like the pigeon. Using a number of flaps, motors, and sensors to recreate the anatomy of a bird’s sliding feathers in a wing could be perilous, as a lot could potentially go wrong. If one motor or one sensor fails, the rest follows.

Aerospace engineers have long envied birds for their ability to shape-shift in midair, though they never understood how it was done. Now that we have that piece of the puzzle, we’re one step closer to seeing truly bird-like aviation engineering. But it still might take a while—nature has quite a head start.

“Nature has outsmarted us aerospace engineers quite a bit,” he says. “It was 100 years ago that we started to fly, and birds started to evolve over 100 million years ago.”