General Atomics Aeronautical Systems is developing a new attritable jet-powered unmanned air vehicle (UAV). Called SparrowHawk, it is intended to be air-launched from and air-recoverable by the US Air Force’s (USAF’s) MQ-9 Reaper.

The company has built one prototype so far, which could be flown for the first time before the end of 2020, depending on funding, says Chris Pehrson, vice-president of strategic development for Department of Defense customers with General Atomics. The small UAV could be available for purchase by customers in 2021, he adds.

The SparrowHawk weighs about 91kg (200lb), can carry a payload of about 13.6kg and would have a 174nm (322km) range, says General Atomics. The company declines to reveal the aircraft’s turbine engine manufacturer or thrust rating.

Although it is being developed with the MQ-9 in mind, General Atomics says it is not a programme of record with the USAF. Instead, the development effort is being funded with internal research and development money.

The SparrowHawk is a spin-off from the company’s failed bid for the US Defense Advanced Research Projects Agency’s (DARPA’s) Gremlins programme, which was won by Dynetics. The DARPA activity is an effort to develop a UAV that can be launched from a Lockheed Martin C-130J tactical transport, flown on a reconnaissance mission and then return to the aircraft to be recovered in flight.

General Atomics declines to say if the SparrowHawk could be refuelled and relaunched after being captured in flight by the MQ-9.

“I’ll just say, in general, I think there’s an advantage to having a small [UAV] being able to be air refuelled,” says Pehrson. “Especially when you have a mothership that can stay airborne for 40h.”

“We do see this as a market opportunity,” says Pehrson. “And we think this is a very important mission space.”

General Atomics sees “synergy” between small attritable UAVs and its legacy aircraft, such as the MQ-1C and MQ-9. It plans to leverage its existing infrastructures of ground control stations and data networks – improved with the addition of more automation and artificial intelligence – to ease the introduction of attritable UAVs.

The company is developing a family of attritable aircraft, including so-called air-launched effects: UAVs that are carried and deployed from a mothership aircraft to be used in a variety of roles, such as intelligence, surveillance and reconnaissance, loitering munition, anti-radiation missile or electronic warfare applications.

“One MQ-9 can be persistent at the outer envelope of the threat airspace,” says Pehrson. “And, when the situation dictates, that [UAV] could drop off all their small [UAVs] that can go on and do a mission; to either serve as decoys for other penetrating aircraft, or provide electronic warfare capabilities to open up a corridor for other aircraft that may be trying to penetrate the hostile airspace.”

The mothership could provide a support role by relaying communications or triangulating the location of threats, he adds.

The US Army has designated the MQ-1C as a chosen platform to carry air-launched effects (top picture), in addition to the Boeing AH-64 Apache attack helicopter, as well as the forthcoming Future Attack Reconnaissance Aircraft and Future Long-Range Assault Aircraft.

General Atomics is upgrading the Gray Eagle Extended Range (ER) variant to be able to carry air-launched effects and loitering munitions. The MQ-1C can carry 20 loitering munitions in five pods beneath its wings and centreline, according to a rendering released by the company in October. 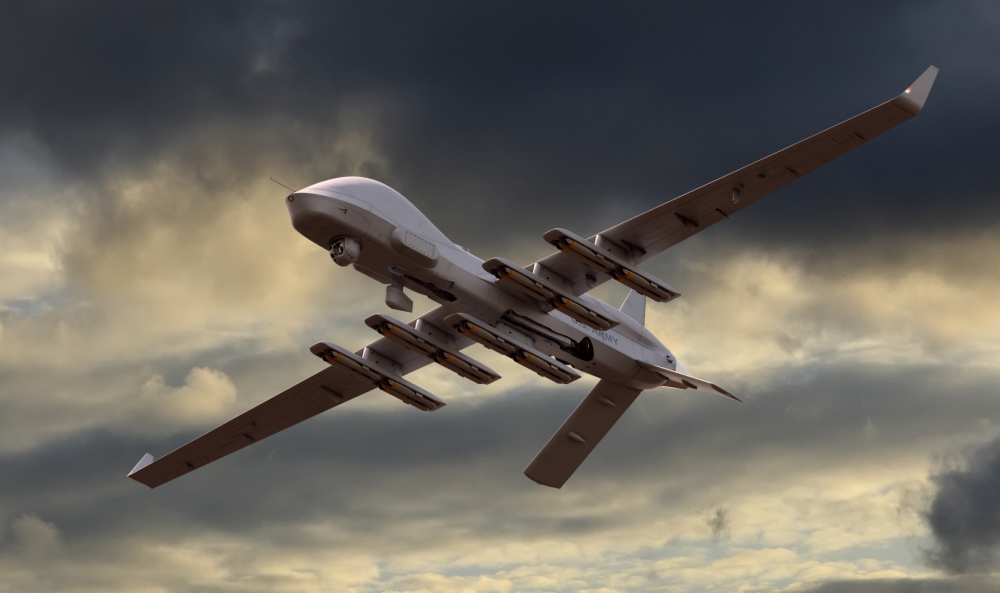 General Atomics will not say how many attritable UAVs or air-launched effects it is developing. It also declines to share a picture or rendering of the SparrowHawk. However, at the Association of the US Army convention in October it displayed two renderings of “notional” air-launched effects on board the Gray Eagle ER. The manufacturer notes that the air-launched effect rendering does not represent a US Army programme of record.

As it enters the attritable UAV industry, General Atomics is competing against a field of manufacturers who already have contracts with government customers, such as Boeing, Dynetics and Kratos. Despite this, the company believes it has found an opening in the market.

“We think that there’s a sweet spot, a knee in the curve, where you can have a more survivable small [UAV], but maybe not as expensive as a very exquisite system – with the same or better probability of accomplishing the mission that you want to do,” says Pehrson.

Finding this spot will depend on the company’s ability to build its UAVs with an open architecture and modularity, he says. That would allow the US military to remove expensive sensors and payloads before it sends attritable UAVs on dangerous missions.

“We want to give the customers options. We want to have a low-cost truck; a truck that’s reconfigurable and modular,” says Pehrson. “If you really want to throw out large numbers of them, the platform itself would be relatively cheap and you just don’t put an expensive payload in it.”

General Atomics is designing its attritable UAVs using open architecture standards such as the US Army’s Future Airborne Capability Environment, the USAF’s Universal Command and Control Interface and the US Department of Defense (DoD) Modular Systems Architecture Standards.

“We’ve invested a lot of R&D into making our platforms and the payloads we developed into open systems,” says Pehrson.

Ultimately, the goal would be to give the DoD flexibility.

“I think the key is just providing options to the customers and quantifying that cost, so that when you design it you can articulate what the cost would be to do certain missions or certain [concepts of operations],” he says.