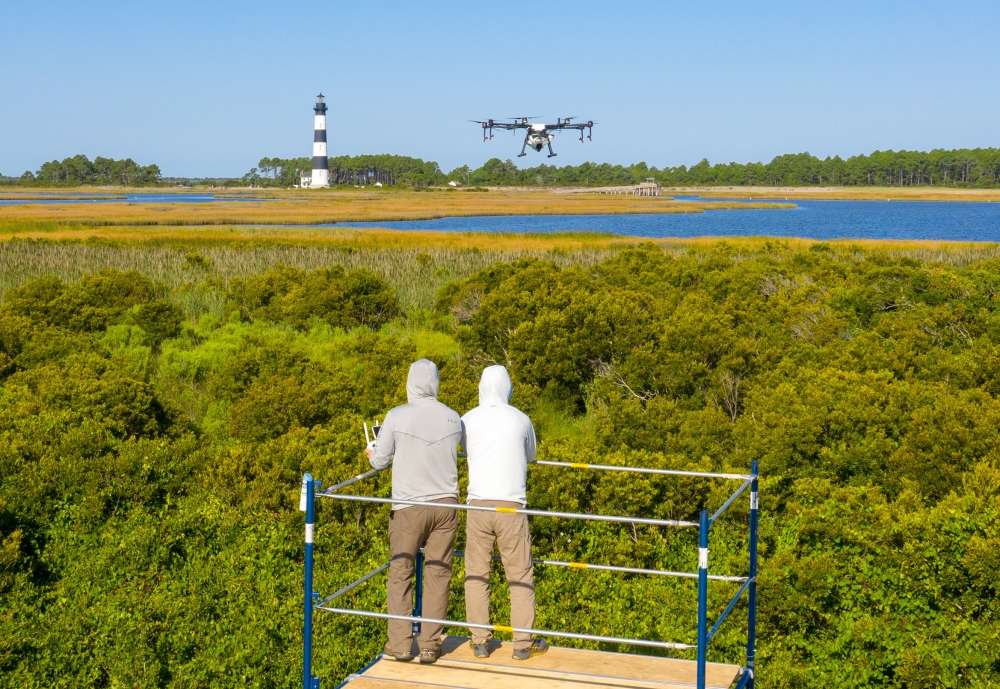 The N.C. Department of Transportation’s Division of Aviation and its Environmental Analysis Unit have teamed up to fight invasive plants with a new tool: drones.

The area around Bodie Island Lighthouse was overrun with Phragmites, a type of aggressive, non-native marsh grass that pushes out all native species. NCDOT was responsible for combating the invasive plant as part of its environmental mitigation for the construction of the new Basnight Bridge over Oregon Inlet. The NCDOT Environmental Analysis Unit turned to the Division of Aviation to help explore the use of drones as an alternative to traditional airplane- or helicopter-based herbicide spraying.

The project, which recently wrapped up for the 2019 season, found that drones provide a more targeted and efficient spray operation than traditional methods. Drones use less of the herbicidal spray, as they can be programmed to target a specific area and flown safely at low altitudes to reduce the amount of herbicide blown away by wind. They can also be outfitted with cameras that allow officials to monitor areas without having to step through potentially dangerous terrain or disturbing other plant and animal life.

“The drone has minimal impact on the surrounding area,” said Morgan Weatherford, environmental modelling team lead with the NCDOT Environmental Analysis Unit. “It was easier to avoid harming native species, better targeted, and quick to mobilize – great for somewhere with unpredictable weather like on the Outer Banks.”

Drones are also safer and more cost effective than manned aircraft for these types of operations because they eliminate the need for plane and helicopter pilots to fly low while applying the herbicide. Additionally, in the case of popular tourist sites like Bodie Island Lighthouse, the area doesn’t need to be closed to the public while operations are taking place.

“This was a one-of-a-kind partnership, and the first time a drone had ever been used for herbicide spraying on National Park Service land,” added Weatherford. “We plan to continue and expand our drone program in the future.”