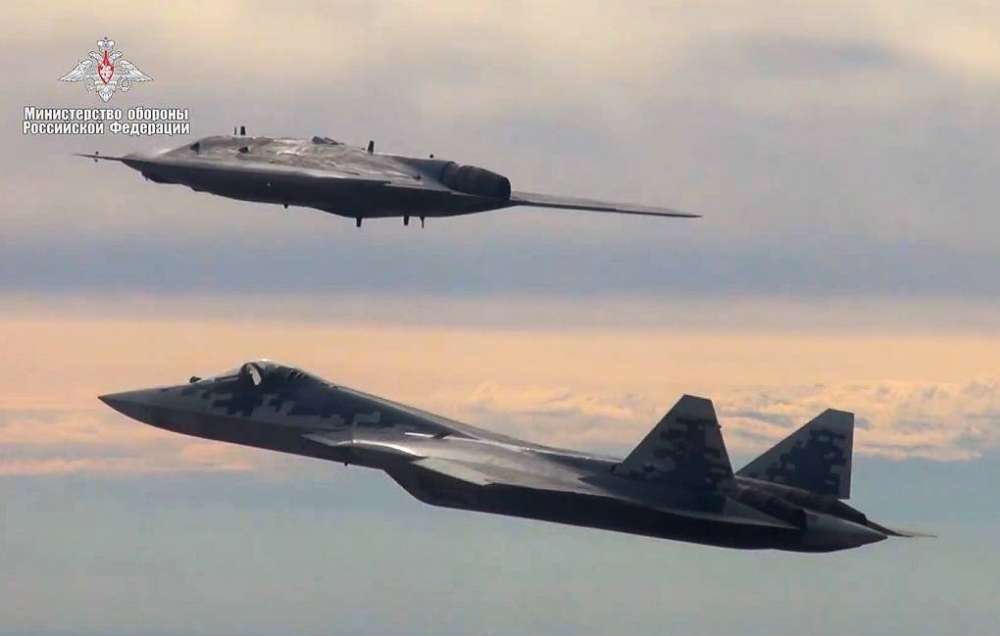 “The Okhotnik unmanned aerial vehicle has performed its first joint flight with a fifth-generation Su-57 plane,” the ministry said.

The flight was conducted in the automated mode. “As part of the ongoing test program, the Okhotnik drone performed a flight in the automated mode in its full configuration, entering the airborne alert area,” the ministry said. During the flight, the drone and the Su-57 fighter practiced interaction “to broaden the fighter’s radar coverage and to provide target acquisition for employing air-launched weapons,” the ministry added.

The joint flight of the latest drone and the fifth-generation fighter jet lasted more than 30 minutes. The drone’s tests are being held at a testing aerodrome of the Defense Ministry, the ministry specified.

The office of Russian Deputy Prime Minister Yuri Borisov told TASS at the MAKS-2019 international aerospace show in August that the serial deliveries of the latest heavy attack drone Okhotnik to the troops would begin in 2025. The tests of the Okhotnik drone in its attack modification with various armament would be held in 2023-2024, it reported.

As the vice premier’s office pointed out, the Okhotnik will serve as a “universal baseline platform for carrying advanced air-launched weapons, onboard reconnaissance systems and other equipment, which will allow constantly expanding the drone’s functional capabilities during the serial production.”

The debut flight by Russia’s Okhotnik heavy attack drone developed by the Sukhoi Design Bureau lasted over 20 minutes. As the Defense Ministry specified, the aircraft “performed several flyovers around the aerodrome at an altitude of about 600 m under an operator’s control and made a successful landing.” The flight took place at one of the Defense Ministry’s testing aerodromes.

The Okhotnik features stealth technology and the flying wing design (it lacks the tail) and has a take-off weight of 20 tonnes. The drone has a jet engine and is capable of developing a speed of around 1,000 km/h.

According to the data of Russia’s Defense Ministry, the drone has anti-radar coating and is outfitted with equipment for electro-optical, radar and other types of reconnaissance.

The remote-controlled Okhotnik model was unveiled at the Army-2019 international defense exhibition outside Moscow in late June. 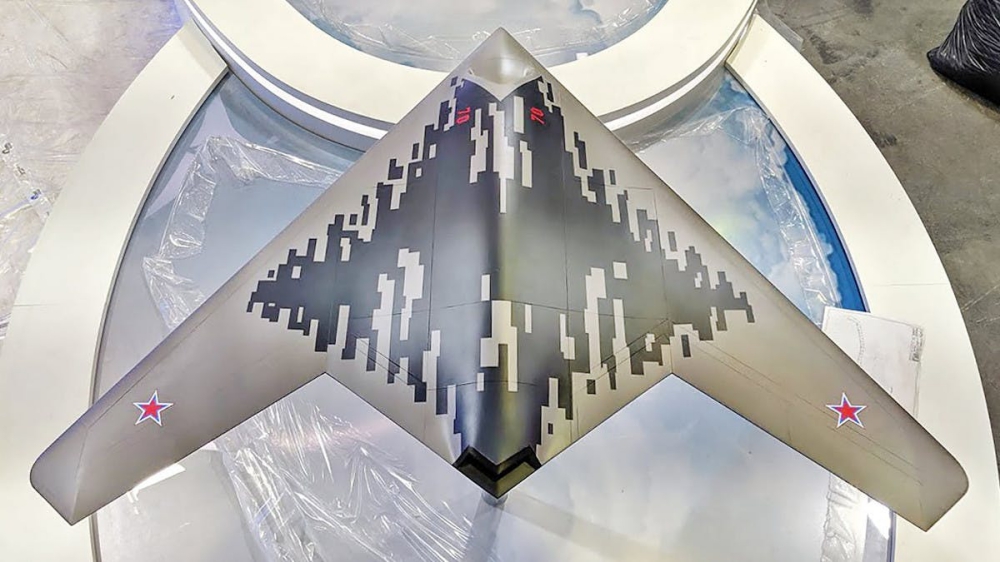 A top down look at the S-70 model at MAKS 2019, showing a completely revised engine and exhaust configuration

“The program of the Okhotnik’s flight tests stipulates several more flights with the sequential complication of flight assignments, the source specified.

The drone will perform one of its flights in a partially autonomous mode: an operator on the ground will give only several commands, the source said.

“A possibility is also envisaged for the drone’s completely autonomous flight without the operator’s participation when it takes off, performs its program and lands only under the control of its own guidance system.”

As another source in the defense industry told TASS, before that the drone already made several take-offs, jumping several meters above the runway and landing immediately after that. The drone performed a whole series of such tests but they are not viewed as a full-fledged flight, the source said.