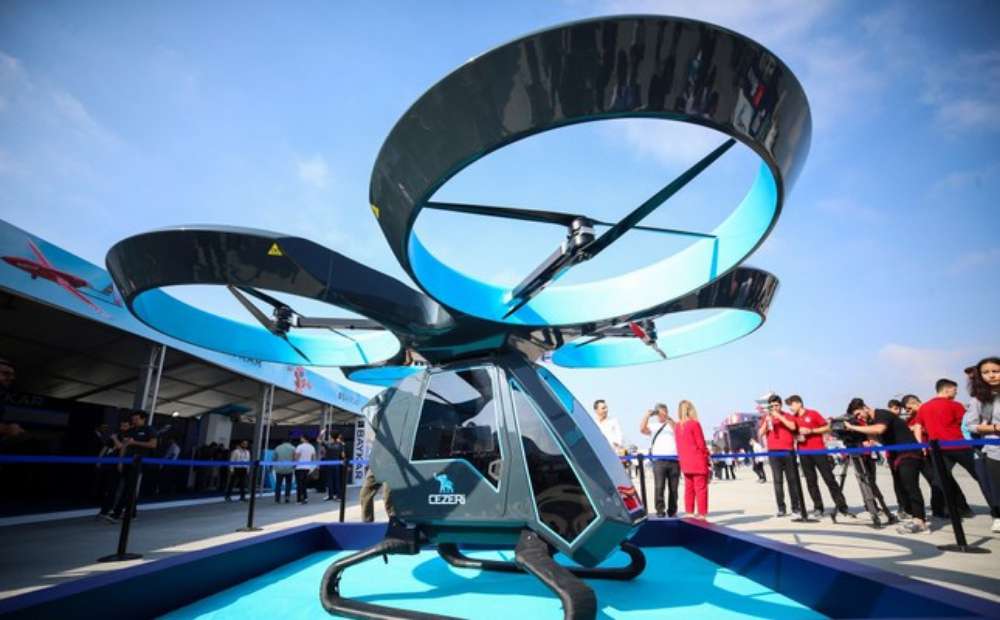 A team of 50 engineers at Cezeri Robot, a concern of Baykar Group, under the guidance of Baykar‘s Technical Manager and Turkey Technology Team Foundation (T3 Foundation) Chairman Selçuk Bayraktar developed the flying car. Cezeri stood caught the imagination of the visitors throughout the event. Project manager at Cezeri Robot, Ozan Yağcı became a prominent name at this year’s Teknofest, thanks to their product.

“Members of the International Vertical Flight Society are now curious about our prototype. They want to know what kind of vehicle it is,” Yağcı shared his enthusiasm while introducing Turkey’s first national flying vehicle to the visitors throughout the four-day festival.

Cezeri Robot, named after the 12th-century Muslim inventor Ismail al-Jazari (Cezeri in Turkish), has been involved in hundreds of projects, including the giant air-land transport brands such as Boeing, Bell, Rolls-Royce, the leading names of ride-sharing such as Uber, and cargo companies like Amazon due to its unmanned aerial vehicle-based technology.

While the competitive race continues in the international arena, the flying car market is estimated to be worth $90 billion by 2026, according to Report Consultant. Finally, on Sept. 14, Germany’s Volocopter brand completed its project and successfully performed the flight test. So, what is Turkey’s position in this race?

Yağcı said Turkey was very close to flight tests and that they would concentrate on the testing process after Teknofest. “We are not following the trend but determining the trend. We have gathered serious experience in aviation for a while now. Our Bayraktar TB2 UAV flew around 150,000 hours. We have very advanced technologies in terms of both software and hardware,” Yağcı said.

“In aviation, there is a rule: to say that an aircraft is reliable, it must have flown 30,000 hours. Many international brands have made hour-based flights. We have achieved thousands of hours; therefore, we use proven flight algorithms. We own the critical components, the entire flight control system, the sensor and the structural system of this vehicle.

When reminded of the projects in the U.S. and Europe, most of which were electric, some worked with hybrid and even hydrogen fuel, Yağcı noted that if you want to transport people, the vehicle must be hybrid or electric. “Hybrid stays in the air longer, but there is carbon release. After all, everyone has to go back to electricity, but the truth is that a serious leap is a must in battery technology,” he further explained. 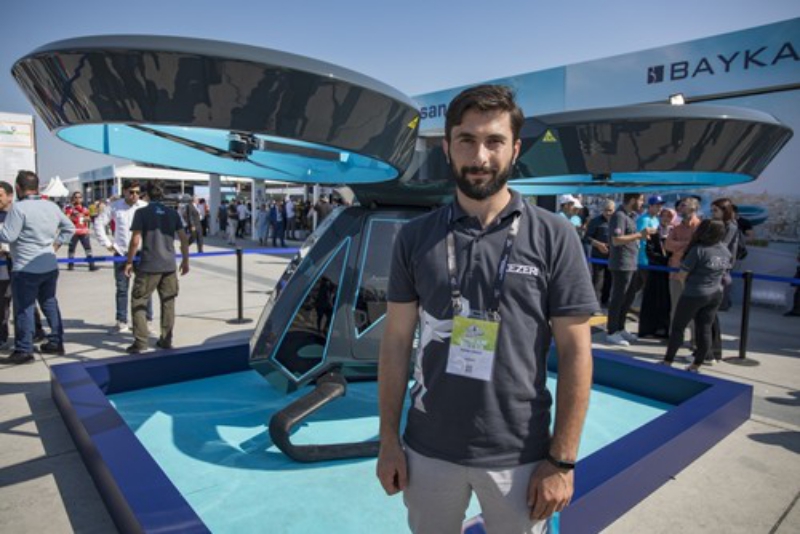 Ozan Yağcı, the project manager of Cezeri poses with the flying car

Yağcı pointed out that the regulations regarding civil public transport are a priority, as well as the battery technology, which is the determinant of the load-carrying capacity. “Before dozens of these vehicles fly in the air, everything needs to be defined regularly because there are too many details to consider,” he continued. “This is a very difficult job. There is no international standard because everyone is new at this. It will take time to close the gaps in the aviation sector. Both the U.S. and Europe have just begun working on this issue. As we begin our flight tests, we will also work on these civil aviation rules.”

Yağcı said they wanted to integrate superior aviation systems to aircraft in the next stage, indicating that they would use LIDAR sensor technology, which could be defined as the operation of the radar with laser systems, allowing the visualization of what is happening around the aircraft in three dimensions. This technology allows the aircraft to detect and avoid obstacles, just like autonomous vehicles.