Dynetics, manufacturer of the intelligence, surveillance and reconnaissance UAV, says that it is ready to demonstrate the aircraft, which will deploy from a wing pylon on a Lockheed Martin C-130 tactical transport. It will subsequently be recovered mid-flight using a mechanical arm that reaches from the cargo ramp of the transport aircraft.

However, the earthquake that struck near China Lake on 5 July broke a critical piece of testing equipment, called the flight termination system. This ground equipment is needed to terminate a flight demonstration that goes awry. 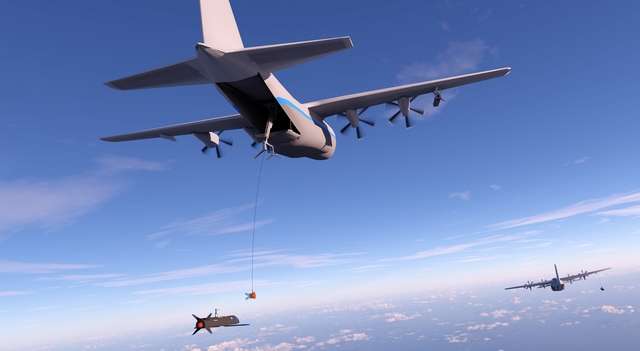 Artists impression of a C-130 recovering a Gremlin

Given limited flight test ranges available, Dynetics has been forced to adjust its demonstration schedule until China Lake becomes available again. In the meanwhile, it is looking to proceed with other partial tests.

“The next flight will be just with our vehicle [releasing] off the wing of the C-130, and it’ll be controlled by our control station on the C-130,” says Tim Keeter, deputy programme manager and chief engineer for the Dynetics Gremlins team.

“So, there’s still that data link operation going on [between the UAV and C-130]. We’ll ground recover. That’s before the end of the calendar year, if we can make these adjustments given China Lake’s current situation.”

After that, the company hopes to test the Gremlins’ full avionics using a stand-in Learjet owned by testing company Calspan. That Learjet would be configured to fly just like the Gremlin, approaching a C-130 from behind in a simulated dock with the transport. For safety reasons the UAV wouldn’t approach the docking station closer than 11.9m (30ft), says Keeter.

“And then at that point, we should be ready to fly our Gremlins air vehicle and attempt to recover with a C-130. We hope to be doing that probably in the Spring of 2020. We’ll get as many [test flights] as our schedule and budget allow.”

The DARPA requirement is that Dynetics’ must be able to recover four UAVs using a C-130 in under 30 minutes. Per the requirements, the company is supposed to be able to quickly refuel and re-oil the aircraft, launching it back to flight within 24h.

The aim of the rapid turnaround is a tireless surveillance tempo that adversaries have difficulty keeping up with. In order to quicken the pace even further, Keeter says some undisclosed US military services have asked about recovering, refueling and then relaunching the Gremlins from the same in-flight aircraft.

Dynetics says even though it hasn’t yet demonstrated DARPA’s goal capability it is getting interest from a broad set of the US military services. The company points to the aircraft’s designation as the X-61A by the US Air Force in August as another sign of approval.

The company says its UAV is powered by a Williams International F107 turbine, a 700pound-thrust (3.11kN) engine. The aircraft is semi-autonomous, allowing for one controller sitting aboard a C-130 to control up to eight examples of the UAV at once.