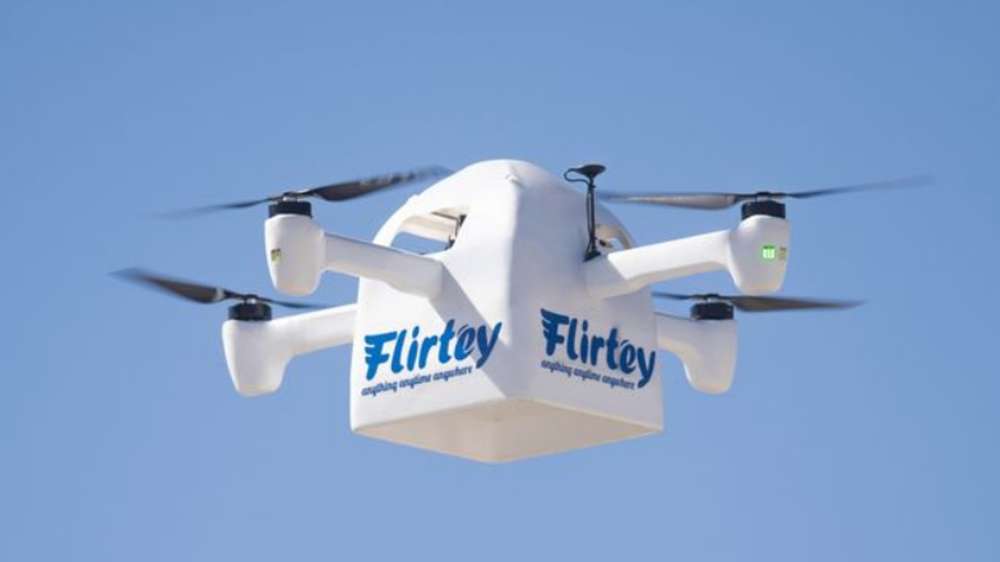 Nevada-based company Flirtey unveiled The Eagle drone delivery system, which will help Flirtey further its mission to  “save lives and change lifestyles by making delivery instant for everyone.”

Flirtey is an independent drone delivery service and made history in 2015 by conducting the first Federal Aviation Administration-approved last-mile drone delivery. The logistically challenging final mile of delivery accounts for 53% of the total cost of delivery. Autonomous drone technologies could drastically reduce that percentage.

With continued FAA-backing, the Eagle will begin testing last-mile deliveries to homes in the final quarter of 2019.

This Eagle system departs from previous drone-testing in several ways:

At a press conference in Washington D.C., U.S. Senator Catherine Cortez Masto (D-Nevada) spoke and introduced Flirtey CEO Matthew Sweeny, reinforcing Nevada’s status as “the innovation state” and the importance of unmanned aircraft systems (UAS) for the economy. Currently, the drone industry generates $4 billion to the economy and is projected to increase that amount to $14 billion by 2025.

“This amazing technology can improve our quality of life; deliver packages and medicine; help search-and-rescue teams locate victims of natural disasters; help construction teams build roads, bridges and tunnels; monitor our infrastructure to prevent gas leaks and oil spills; and it can also help reduce the chances of our workers being exposed to dangerous situations,” said Cortez Masto.

In May 2019, the FAA announced 10 recipients of their UAS Integration Pilot Program (IPP), and the City of Reno was one of them. This program allows Reno-based companies like Flirtey more leeway to experiment with drones and collect data for the United States Department of Transportation and the FAA. The data will help these groups implement well-informed safety regulations for drone technology once the two-and-one-half year program concludes.

Matthew Sweeny, CEO and founder of Flirtey, has gathered talent from NASA, Raytheon, Lockheed Martin and SpaceX, as well as veterans from the U.S. Army, Navy and Airforce. The Eagle drone delivery system is made in the U.S. and is protected by at least 25 patents.

”Imagine if we applied the mission-driven speed of the space race to today’s technology to accelerate the pace at which we’re making the world a better place. I’m here to tell you that a new age of technology is dawning and it is being driven by mission-driven technology startups,” Sweeny said in a statement. “Flirtey’s technology has unique capabilities unavailable from any other aircraft manufacturer to enable first-movers to capture market share in their industries. Flirtey’s latest technology makes life-saving and commercial drone delivery to homes in the United States an imminent reality.”

Drone-technology is a nexus of private and public interests. While speedy package deliveries drives consumer attention, Sweeny reiterates the capability of drones to reduce carbon emissions by getting cars off the road and to save thousands of lives a year by partnering with emergency medical providers to deliver defibrillators.