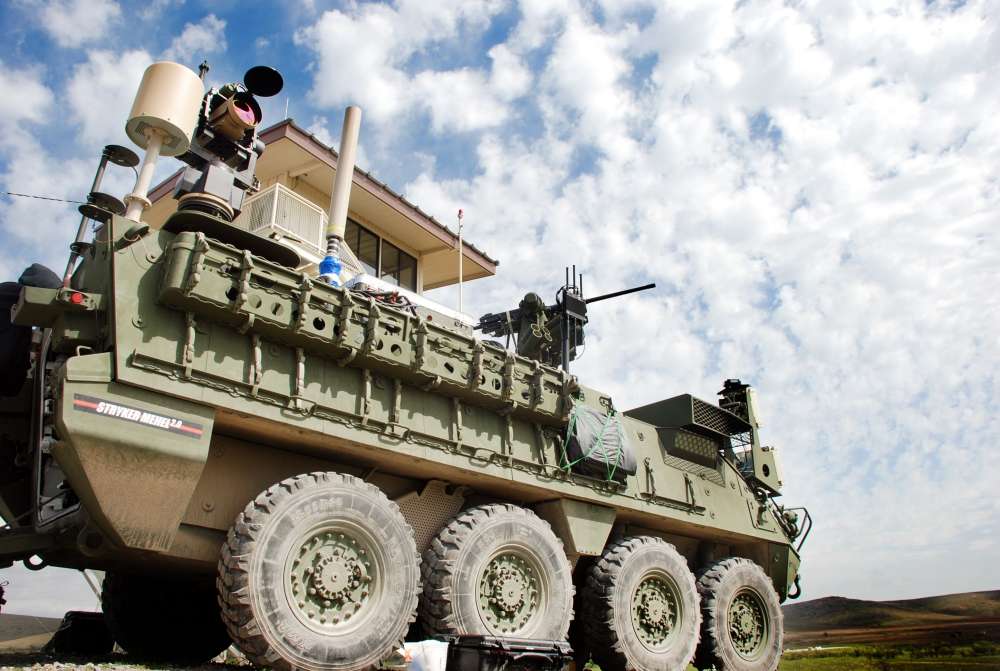 A 5 kilowatt (kW) laser integrated on a Stryker participated in the Maneuver Fires Integrated Experiment (MFIX) at Fort Sill, April 5, 2017

The U.S. Army issued a contract award to accelerate the rapid prototyping and fielding of its first combat-capable laser weapon system.
This prototype will deliver 50 kilowatt (kW)-class lasers on a platoon of four Stryker vehicles in Fiscal Year 2022, supporting the Maneuver-Short Range Air Defense (M-SHORAD) mission.

“The time is now to get directed energy weapons to the battlefield,” said LTG L. Neil Thurgood, Director of Hypersonics, Directed Energy, Space and Rapid Acquisition. “The Army recognizes the need for directed energy lasers as part of the Army’s modernization plan. This is no longer a research effort or a demonstration effort. It is a strategic combat capability, and we are on the right path to get it in Soldiers’ hands.”

High energy lasers engage at the speed of light and provide a solution to a constantly evolving threat space, while reducing the logistics trail associated with conventional kinetic weapon systems. In May 2019, the Army approved a new strategy for accelerating the rapid prototyping and fielding of a variety of directed energy weapons to enable Army modernization.

As the first step in delivering prototypes with residual combat capability, the Army Rapid Capabilities and Critical Technologies Office (RCCTO) has selected two vendors to build the directed energy M-SHORAD mission prototypes in order to foster competition and stimulate the industrial base for directed energy capabilities. Those vendors, Northrop Grumman and Raytheon, are subcontractors in an Other Transaction Authority (OTA) agreement between the Army and Kord Technologies.

Under the OTA award action, issued on July 26 in the amount of $203 million, Kord has teamed with Northrop Grumman and Raytheon to develop the competing prototypes with support from General Dynamics Land Systems, which makes the Stryker, for integration work. Under the terms of the contract, the two laser vendors have approximately one year to produce the required laser subsystems, integrate them onto the Stryker platform, and complete a competitive performance checkout leading into a range demonstration against various threats.

After the Army evaluates the results, it plans to purchase three additional laser-equipped Strykers, for a total of four prototype vehicles that would be fielded to an operational M-SHORAD platoon in Fiscal Year 2022. The OTA award has the potential to increase to $490 million for the delivery of the four prototypes.

The directed energy M-SHORAD prototypes are part of the progression of an Army technology maturation initiative known as the Multi-Mission High Energy Laser (MMHEL).

“Both the Army and commercial industry have made substantial improvements in the efficiency of high energy lasers — to the point where we can get militarily significant laser power onto a tactically relevant platform,” said Dr. Craig Robin, RCCTO Senior Research Scientist for Directed Energy Applications. “Now, we are in position to quickly prototype, compete for the best solution, and deliver to a combat unit.”

The Army is also welcoming participation from additional vendors who were not selected for the OTA awards, but desire to compete for the same M-SHORAD requirement and timeline using their own internal research and development funding.

In a related effort, the Army is also adapting its High Energy Laser Tactical Vehicle Demonstrator (HEL-TVD) system into a prototype program order to increase its combat effectiveness and speed up its delivery to Soldiers.

The Army will adjust the current HEL-TVD, a 100 kW-class laser system integrated on a Family of Medium Tactical Vehicles platform developed by Dynetics and subcontractor Lockheed Martin. Under the new directed energy strategy, the Army is leveraging progress made in that effort in order to merge the HEL-TVD with similar technologies in development by the Navy and the Office of the Secretary of Defense.

This partnership will allow the services to achieve a higher power system, of approximately 250-300 kW-class, that can protect sites from RAM and UAS as well as more stressing threats — significantly increasing the warfighting capability being transitioned on the original timeline. The Army’s goal is to deliver four such prototype lasers integrated on tactical vehicles, for a capability known as High Energy Laser-Indirect Fire Protection Capability (HEL-IFPC), to a platoon by Fiscal Year 2024.

“By teaming with the other services and our industry partners, we will not only save resources, but exponentially increase the power level and get a better system to Soldiers faster,” Thurgood said.

The Army RCCTO, headquartered at Redstone Arsenal, Ala., is chartered to develop rapid prototypes and field residual combat capabilities. Its current focus areas are hypersonics and directed energy.