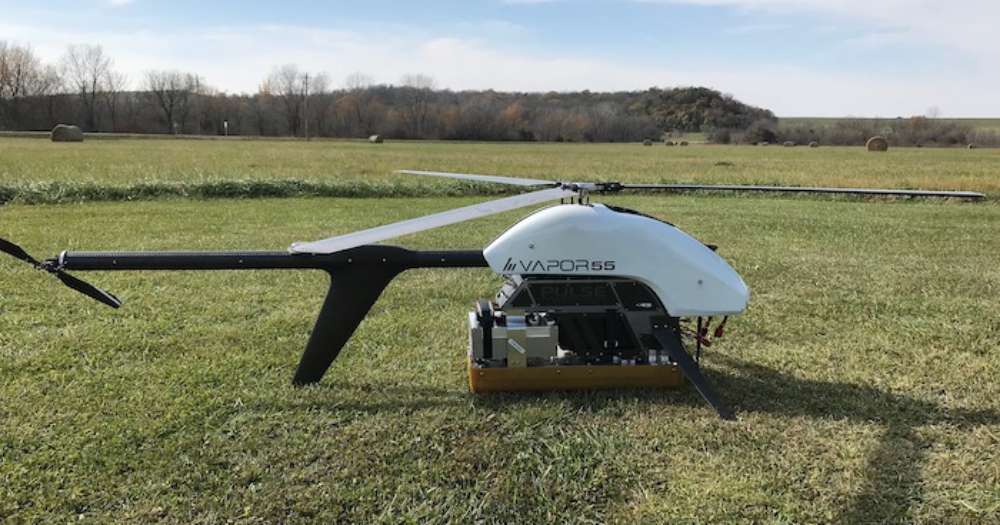 A University of Kansas aerospace engineer has earned the National Science Foundation’s most prestigious award for young faculty to design, build and fly a radar suite and integrate it on a helicopter-based unmanned aerial system (UAS) to gather data on some of the world’s most critical glaciers.

Emily Arnold, assistant professor of aerospace engineering, will use her five-year, $609,000 NSF CAREER grant to incorporate radar and antenna into a 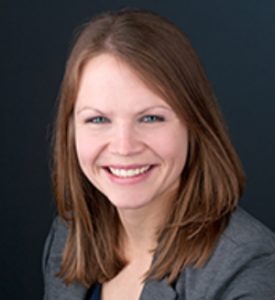 “It’s a technology development grant where we’re integrating some small radars and antenna systems onto a helicopter UAS platform for the purpose of sounding and imaging glaciers,” Arnold said. “From a technology standpoint, the innovative aspect is how we’re going to structurally integrate the antennas into the vehicle itself. We’re going to use these and the platform to fly over what are known as outlet glaciers. Specifically under this grant, we’re going to do it in Greenland, but the same technology can be used in Antarctica. These outlet glaciers are really difficult to measure because they’re fast-flowing. They’re highly crevassed, which makes it more difficult for us to detect the bed or anything else we’re trying to measure.”

Arnold will customize a UAS helicopter called the Vapor 55, to be purchased from Lawrence-based Pulse Aerospace, by modifying it with a radar system and antennas integrated into the UAS’ landing gear.

“We’ll add the radar, which is the driving electronics, but it’s the antenna that we’re going to try to integrate into the landing gear — and particularly for the low-frequency radar,” Arnold said. “So, we’ll have both a low-frequency and a high-frequency radar. The biggest challenge with getting that to operate from the UAS is the antenna size. It’s hard to even get an antenna to operate from a large manned aircraft at the frequencies that we’re looking at, which is about 30 megahertz. So, we’re going to have to use novel antenna design concepts for electrically small antennas. And we’re also looking at replacing the landing gear and using the antenna integrated into a new landing gear concept to try to get this antenna onto the vehicle.” 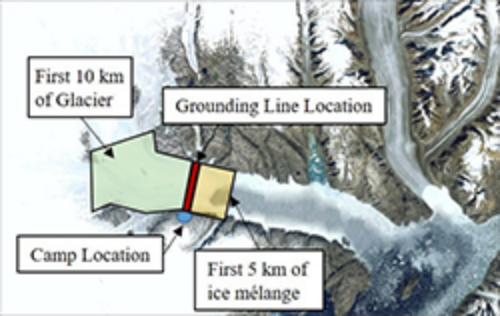 An overview of the measurement area, Greenland’s Helheim glacier

She said a UAS helicopter offered practical advantages over fixed-wing UASs and would provide greater resolution in its radar measurements.

“Our ability to take off and land vertically is very advantageous because that means we basically can camp right by the glacier and just do our measurements from right there,” she said. “It significantly reduces the logistical footprint of taking these types of measurements. In addition, because we’re doing this from a small helicopter, we can fly very slow. And we can also hover, which is very advantageous in these regions as we can increase signal-to-noise ratio where it’s hard to detect our signal.”

Another reason for using the commercial UAS helicopter as a platform for the project is its relative ease of operation even in the inhospitable conditions likely in remote Greenland.

“With the helicopter, you need a lot less training,” Arnold said. “You don’t need to be a highly skilled UAS pilot to operate it. With some of the fixed-wing UAS, pilots we hire have years of experience — a lot of them have been flying remote-controlled aircraft since they were kids. With this helicopter, they have a two-week training program and you learn how to use the system — that’s pretty much the bare minimum. But going out to a very remote location that has extreme weather conditions, we’ll do several months of training where we need to be out flying in high wind conditions, in cold conditions, in warm conditions, all sorts of things. Just so our team feels very confident in the operation of not only the vehicle but also the radar itself.”

According to Arnold, she and her colleagues and students will develop a new signal processing approach by flying closely spaced flight lines back and forth with the vehicle to form a “large synthetic aperture in the cross-track direction that will enable the use of advanced beamforming algorithms necessary to suppress surface clutter and detect the weak bed echo.” The resulting data will be made available through CReSIS to researchers investigating ice dynamics and resulting sea-level rise.

“With these two radar systems, we can get the depth of the ice sheet by looking at what the bedrock looks like as well as the surface,” she said. “We’re going to try to measure crevasse size as well, which is really a dataset that they don’t have very good information on. The primary means to measure crevasses is with satellite imagery, but it’s hard to get individual crevice measurements. The bed measurements are really important because those are used by glaciologists as a boundary condition when they’re modeling. We are particularly targeting measurements over the grounding line, which is where the glacier goes from being attached to the bedrock to floating. That’s one of the most important locations to be able to model; however, it is also the most difficult area to measure. Glaciologists are often missing that portion of the bed in their models. We think with this sensor-platform combination we’re developing, we’ll be able to image the bedrock in that location, which is crucial to improve sheet models that are used to predict glacier motion and our predictions for future sea-level rise.” 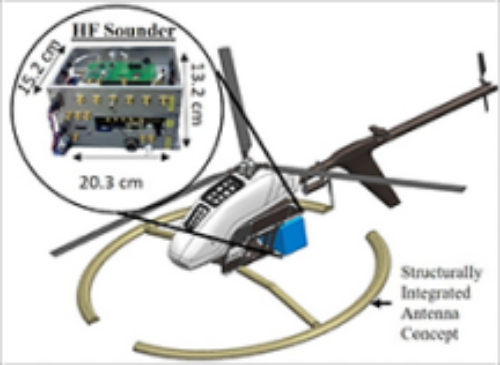 In addition to the scientific research mission, Arnold’s NSF CAREER grant will enable the education of her KU School of Engineering students. Further, Arnold hopes to integrate the project into her ongoing outreach efforts to K-12 students, particularly girls with an interest in STEM.

“This project is a design-build-fly activity,” she said. “We can integrate similar activities into the classroom. So, I’m looking at using it for both a senior-level capstone design class as well as my graduate class. Here, you have an aircraft structure and you want to integrate an antenna into it — what is that structure going to look like? I think our students really appreciate that we’re not just doing this activity because Dr. Arnold came up with it — it actually has some benefit to my research program and research at large. I also do outreach activities for K through 12, particularly activities that target young females that are interested in STEM. And going out there and talking to young girls about camping on the side of a glacier in Greenland and flying a UAS over it, I mean, how much more exciting can engineering work get? There’s a real sense of adventure associated with this research activity that I like to leverage to get young students interested in engineering.”