FAA to Get Embattled New Leader 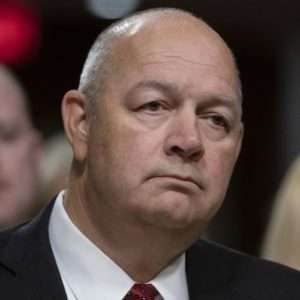 The Federal Aviation Administration is finally about to get a new leader — a move that ideally would offer a clean break for an agency that has faced months of punishing scrutiny over two deadly crashes of Boeing’s 737 MAX.

Instead, incoming Administrator Steve Dickson will enter under a cloud of his own, after his confirmation process unearthed allegations that Delta Air Lines retaliated against a safety whistleblower while he was a top safety executive there. Tuesday afternoon his nomination passed a key test vote in the Senate and could be finalized just a few hours later.

Dickson, who retired in 2018 as Delta’s senior vice president of flight operations, will inherit an agency that is still trying to reassure the traveling public and other nations’ aviation regulators about its ability to oversee the safety of Boeing’s grounded plane. The FAA also still faces questions about how it is carrying out a congressionally-mandated process of delegating much of its aircraft approval and inspection work to manufacturers such as Boeing — as well as fears that the 737 MAX won approval despite dangerous flaws in an automated flight control system.

Multiple probes are underway into the two 737 MAX disasters that occurred — one in October near Indonesia, the other in March in Ethiopia — including investigations by two independent watchdogs, a specially formed panel and committees in both chambers of Congress. The FAA has lacked a permanent leader since January 2018, when Obama-era administrator Michael Huerta’s five-year term ended.

At his nomination hearing in May, Dickson promised to be “a steady hand on the tiller, which I think is what the American public needs. But that doesn’t mean that I’m not going to be asking the tough questions and making the changes that need to be made.”

“There’s going to be a process here of making sure that the public continues to be confident in our aviation system,” Dickson told members of the Senate Commerce Committee. “I would not certify an airplane or put my family on any airplane unless I thought it was safe, and I think that we are indeed the gold if not the platinum standard in the world.”

But Dickson’s nomination quickly became embroiled in concerns about an ongoing administrative complaint against Delta in which a pilot, Karlene Petitt, contends that the airline retaliated her, including ordering her to undergo a psychiatric exam, after she reported concerns about pilot training, fatigue and other matters to Dickson and another executive. Dickson has said the evaluation was done for the sake of safety.

Senators didn’t learn about Petitt’s case, or a deposition that Dickson had given for it, until after his nomination hearing. Dickson said he didn’t disclose it because he’d interpreted a Senate Commerce questionnaire as asking after “my personal conduct, my behavior both in general and as an officer of a large public company, or any instance in which I was a named party to a proceeding.”

Democrats and some safety advocates seized on the accusations to argue against confirming Dickson, saying he does not represent the reset the FAA needs after the two Boeing 737 MAX crashes that killed 346 people and raised doubts about U.S. leadership in aviation safety. The vote on Dickson’s nomination is still pending, but he is expected to prevail.

On Tuesday, shortly before Dickson passed a key procedural hurdle, Sen. Maria Cantwell (D-Wash.) said it’s “clear to me he is not the right person for the safety culture that we need today at the FAA.” She also referred to a prior party-line vote in committee to move his nomination forward as “distressing,” saying “we should have found consensus on a nominee for the FAA given all the concerns the public has about flying safety.”

“Someone who takes safety seriously and listens to the pilots is what we need on the front line,” Cantwell said.

Chesley “Sully” Sullenberger, the pilot at the controls of the “Miracle on the Hudson” flight in 2009, cited the whistleblower allegations in publicly opposing Dickson’s confirmation.

“His actions and words raise grave concerns about his ability to act with the integrity and the independence the next FAA administrator must have in order to navigate the challenges of the ungrounding of the 737 MAX and to rebuild global trust in the FAA’s competence and ability to appropriately certify new aircraft designs,” Sullenberger said in an interview with POLITICO.

“This is absolutely the worst time” for any concerns to be surrounding the FAA’s new administrator, said Peter Goelz, former managing director of the National Transportation Safety Board, an independent federal agency that investigates transportation accidents.

The FAA’s reputation has “been damaged in part because I think there is a perception, particularly among other regulatory agencies, that the FAA is not proven to be independent of Boeing, that it has not exercised its regulatory oversight in an aggressive manner,” Goelz said. “And it’s going to take some time for the FAA to regain its worldwide leadership position.”

Senate Commerce Chairman Roger Wicker (R-Miss.) has stood by Dickson, saying he doesn’t believe that “the concerns about the whistleblower are well-founded.”

Before his committee’s vote on Dickson, Wicker said that Dickson “clearly demonstrated the experience and leadership abilities necessary to lead the FAA” at his nomination hearing, and that in written responses to questions from senators, he showed that “his commitments to safety and protection of employees who report concerns … are paramount.”

“It is vital to have a Senate-confirmed administrator at the helm of the FAA at this crucial time for the agency,” Wicker said. “I believe Mr. Dickson is an excellent nominee for this position.”

Brianna Manzelli, a spokesperson for Wicker, said his committee office had received many documents related to the whistleblower’s case and “fully vetted” the allegations, deciding to move his nomination forward after having determined that he is “not accused of being responsible for any alleged retaliatory act” against the pilot.

Lawmakers tasked with overseeing the FAA have suggested that the agency may have become too close to Boeing, and that its process for delegating increasing amounts of authority to manufacturers — as Congress has repeatedly encouraged — doesn’t allow enough oversight.

Sen. Richard Blumenthal (D-Conn.), who opposed Dickson’s nomination, said his Delta career “should be read as calling into question his independence and ability to put the FAA back in charge of safety.”

At the agency, there needs to be “clear independence, not only an expression of independence, but a public perception and a guarantee of independence because of the claims that the FAA has been, in effect, delegating too much responsibility to the airlines,” Blumenthal said.

At his hearing in May, Dickson defended the practice of delegating certain certificationresponsibilities to the private sector, though he noted his personal experience with delegation doesn’t have to do with aircraft approval but rather with pilots.

“It’s made the FAA a much better regulator and it’s made the carriers, I think, safer and improved the quality of pilots that are being qualified,” Dickson said.

Still, he said he wanted to know more details about the FAA’s approval of the 737 MAX. “How it was applied in the case of the certification of this particular aircraft is certainly something that I look forward to digging into if I am confirmed,” he said.

John Cox, a former executive air safety chairman at the Air Line Pilots Association, vouched for Dickson, saying he would be a good administrator.

“I know him and I’ve worked with him,” Cox said in an interview. “I think, because he’s a good leader and he’s a good manager of people, that he will get the agency moving in a positive direction because everyone knows — and he certainly does — that they have to take positive steps and move forward, and I think that he is a type of leader that can do that.

“The whistleblower allegations — he’s gonna have to deal with it, but I don’t think it would preclude him from being an effective administrator,” Cox said.

Rod Hall, a former assistant administrator for government affairs at the FAA, agreed.

“If he comes in with a clear vision of what he wants to accomplish and it’s anchored in improving safety, places a genuine focus on improving employee morale, and is responsive to the Hill … I think he’ll be fine,” Hall said. “Yes, the agency has had to absorb a couple of gut punches recently, but they’re a resilient crew over there.”

Still, consultant Jeff Guzzetti said he fears it will be destabilizing to bring in a new administrator in place of the acting chief, Dan Elwell, who has overseen the FAA’s response to the Boeing crashes and the effort to return the plane to service. Congress must enact legislation for Elwell to be Dickson’s deputy because both are former military officers.

“I think that it’s a bad idea to change horses in the middle of the stream when the FAA needs stable leadership,” said Guzzetti, who has worked at the FAA, the Department of Transportation inspector general’s office and the NTSB. “And after having worked with Administrator Elwell, I think Elwell’s doing an outstanding job during this crisis. … To suddenly take him out and put in this unknown that has the added detractor of a controversy is not good.”

He added that Dickson may be able to turn the FAA’s reputation around, but it will be a “huge challenge.”