US Navy Ship Downs Iranian Drone in Gulf Of Hormuz 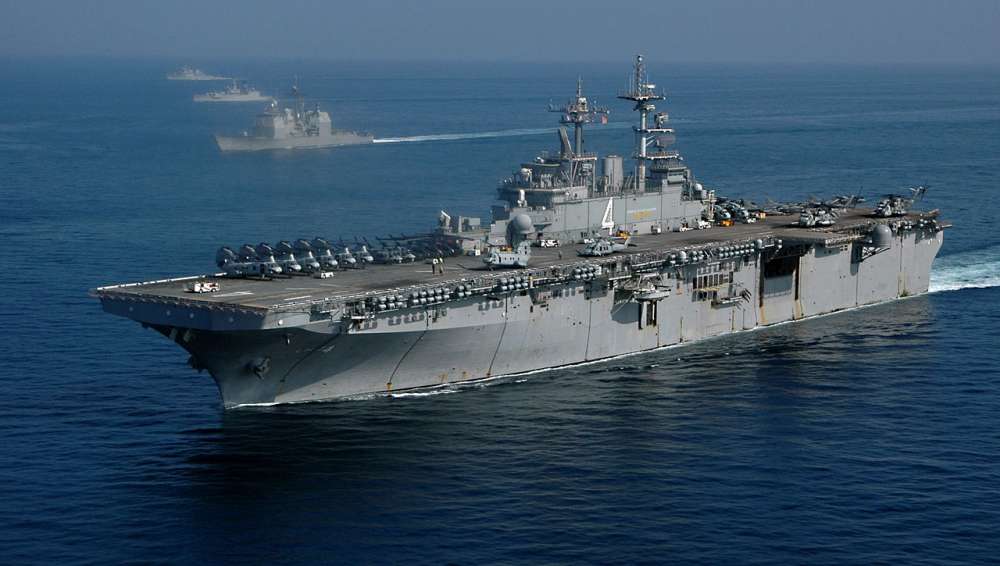 U.S. Marines jammed an Iranian drone in the Gulf of Hormuz Thursday, senior defense officials said, bringing the aircraft down and destroying it.

“The Boxer took defensive action against an Iranian drone,” Trump said, giving details about the encounter at the start of a flag presentation ceremony at the White House. He said the drone had closed to about 1,000 yards from the U.S. ship, “ignoring multiple calls to stand down.”

The drone was threatening the safety of the U.S. ship and its crew, Trump said.

In a statement about the incident, chief Pentagon spokesperson Jonathan Hoffman said that a drone approached the USS Boxer at around 10 a.m. local time and that the ship was in international waters, sailing in “an inbound transit of the Strait of Hormuz.”

Hoffman described the drone as a “fixed wing unmanned aerial system (UAS).” No details were given about the the method in which Boxer downed the drone. The ship is armed with RIM-7 Sea Sparrow short-range anti-ship missiles, and the RIM-116 Rolling Airframe Missile (RAM) and Phalanx CIWS point defense weapons systems. Additionally, the Navy and the Marine Corps have begun to field a wide variety of non-kinetic systems capable of downing a drone by other means.

Specifically, it was almost certainly jamming via MRZR LMADIS, or a Polaris MRZR vehicle sporting a Light Marine Air Defense Integrated System. While a Corps official said as early as May that the deployment of the system to the Middle East was winding down, observers online noted that a MRZR LMADIS system was visible on the deck of the USS Boxer, an amphibious assault ship, for its transit through the Strait of Hormuz in pictures uploaded earlier that day.

On Friday, Iran’s deputy foreign minister denied that one of the country’s drones was taken down.

“We have not lost any drone in the Strait of Hormuz nor anywhere else,” Seyed Abbas Araghchi said in tweet. “I am worried that USS Boxer has shot down their own UAS by mistake!”

While few details about the drone are available, a U.S. defense official tells NPR’s Tom Bowman that the drone was “assessed to be Iranian” and that it was taken down by the Boxer because of “an aggressive act.”

“This is the latest of many provocative and hostile actions by Iran against vessels operating in international waters,” Trump said. “The United States reserves the right to defend our personnel, our facilities and interests.”