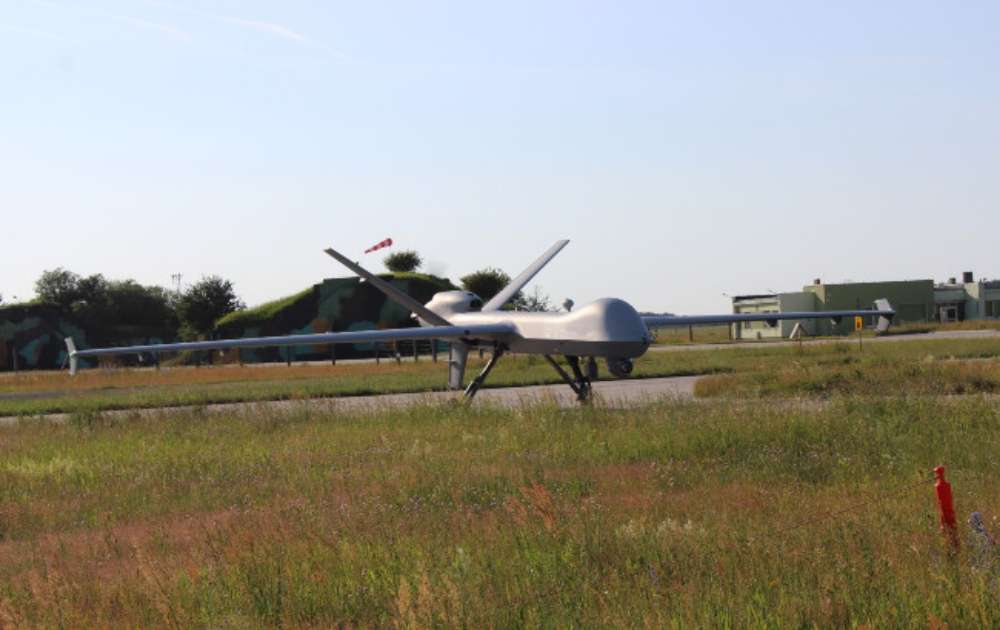 The US Air Force has shifted the eyes of its newly stood up MQ-9 detachment in Europe south, temporarily moving the small number of deployed Reapers from Poland to Romania.

The 52nd Expeditionary Operations Group Det. 2, moved from Miroslawiec AB, Poland, to Campia Turzii, Romania, on July 3 because of construction on the Polish base, but the new operating location gives the contractor-owned, contractor-operated Reapers a closer look at the Balkans.

“The endurance of the plane is pretty much a key factor, and the fact that we have [contractor-owned] and rotational forces, that allows us to have the agility to move if needed,” said Lt. Col. Clayton Sanders, commander of the detachment, in a recent interview at the Polish base.

The detachment reached initial operational capability at Miroslawiec on March 1. The unarmed Reapers—the official number of which is classified, though it is small—are flown and maintained by contractors, with a small detachment of airmen doing jobs such as communications, intelligence analysis, security forces, etc.

The operation is overseen by US Air Forces in Europe. The Air Force detachment sits in a dozen blue mobile containers serving as offices, fenced in from the rest of the base, next to a modern NATO-built hangar and the Block 30 ground control station for the Block 5 Reapers.

“It’s a small presence, but a big enough presence that it assures our Polish partners and our Baltic partners … of that postured and ready force,” Sanders said during an interview in Poland before the Reapers moved.

Gen. Tod Wolters, former USAFE commander and current US European Command boss, told Air Force Magazine in a March interview that having the Reaper in that region allows USAF “to improve our understanding of the battlespace in the vicinity of Poland plus the Baltics. That’s the whole purpose, to improve our indications and warnings so that if tasked we can respond quicker than we ever have in the past, and the MQ-9 addition will do exactly that.”

The Pentagon’s European Deterrence Initiative provides about $40 million to fund the MQ-9 detachment, which has brought new life to a Polish base that only has a permanent presence of small hand-launched UAVs. Poland is now planning extensive renovations, which will include upgrades to the base’s tower and maintenance facilities, in addition to the flightline.

Poland has been a “very stable ally and partner,” which provides a “very strategic location” for the USAF to fly the Reapers, said Lt. Gen. Steve Basham, deputy commander of US Air Forces in Europe, in a recent interview. This presence gives the Air Force the ability to “understand the environment you’re operating in” in addition to having forces in place to be able to spin up quickly if needed.

While day-to-day operations are handled by contracted operators, the Air Force brings in USAF MQ-9 operators for training exercises with allies or other US military units in the region, Sanders said. The presence in both Poland and Romania means MQ-9 operators can fly in a much different environment than they have during the past 20 years of combat in a desert setting.

“There’s a lot of different considerations that we have to take into account for launch, recovery, and even airspace wise,” Sanders said.

The move south to Romania means the MQ-9s, which were already to reach to the Baltics, are now a shorter flight to a hotbed of activity. At the base, the Reapers are now flying alongside F-16s deployed to Romania as part of a theater security package.

Daily Reaper operations give the US the ability to watch for “any adversarial threat in the region,” Sanders said. “The ISR provides that key foundation for us and our NATO partners and allies in the region, we maintain those ready and postured forces. It gives us that force protection data we need.”

Wolters said the deployment helps the US and its allies ensure that “nobody will ever consider violating the sovereign skies, lands, and seas of NATO countries in the region.”