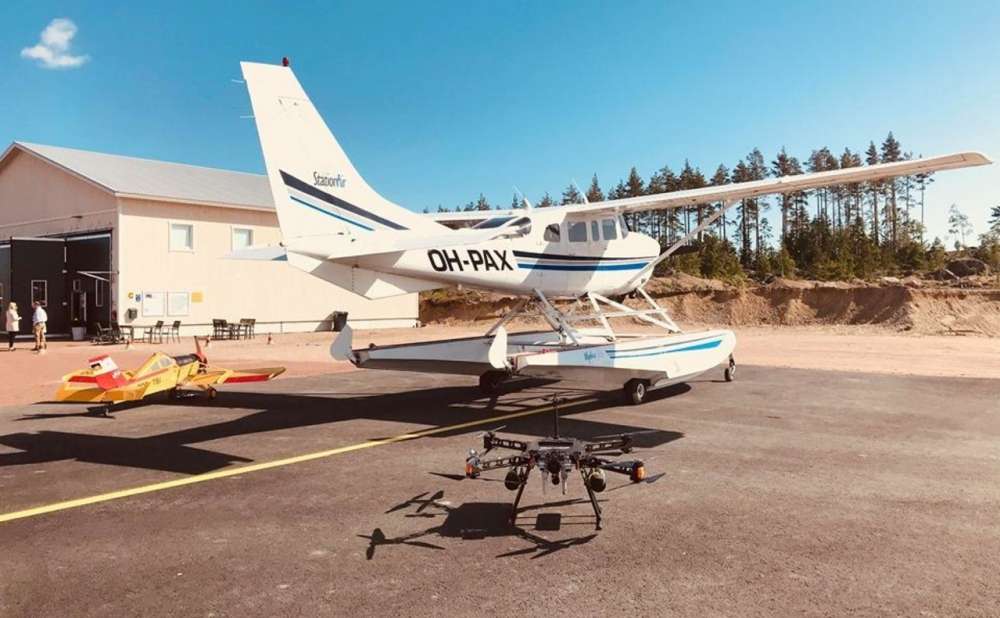 The first two demos in the Gulf of Finland (GOF) U-space project mark a leap forward in the implementation of unmanned traffic management (UTM) in Europe.

For the first time ever, general aviation aircraft, drones, and recreational remote-controlled model aircraft safely shared the airspace above and around an operational airfield during the first demo at the East Helsinki Aerodrome in Pyhtää, Finland, on June 11. During the second demo on June 14, urban drone operations above and below 500 feet were demonstrated in controlled airspace in Tallinn, Estonia.

Weeks of intensive preparation work have already paid off: Two out of eight demos of the SESAR Joint Undertaking (SESAR JU) GOF U-space project have been successfully completed. On June 11, at Pyhtää East Helsinki Aerodrome in Finland, we demonstrated how cooperation at uncontrolled airfield is enabled between RC model fliers, drone professionals, and General Aviation to safely share the same airspace within line-of-sight of each other. In a world-first demonstration, the GOF Flight Information Management System (FIMS) routed data between three UTM platforms and the air traffic management (ATM) domain.

This demonstration showcased the core idea of U-space, increasing transparency for all users. In addition to drone operators, it is also relevant to General Aviation and other airspace users, who are able to access digital tools that the current UTM solutions provide in order to create situational awareness for everyone. Mobile 4G networks were used to relay situational awareness data to both ground crew and general aviation flying up to 2000 feet, tracking targets using transponders, FLARM, and mobile network-based position trackers.

During the second demonstration, which took place on June 14 in Tallinn, Estonia, drone operations were successfully flown in controlled airspace. The purpose of the demo flights was to determine how several UTM’s can service the same airspace and how it is possible to share reliable information with all airspace users by offering real-time situational awareness to air traffic operating in the vicinity. During the demo flight it was established that the delivery of information required for drone operators to operate their drones is possible by creating a common system, integrating independent technical solutions by different UTM services providers.

The trial also showcased how authorised drones can operate with privileged status in otherwise restricted areas. One of the missions simulated a traffic accident to demonstrate how public authority is able to create a temporary flight restriction area around the accident scene, as well as monitor compliance from drone operators, while performing remote identification of drones and pilots through the U-space systems, agnostic of what UTM service the drone pilot was using. Only the Police drone had access to the restricted area to provide law enforcement with high-definition, real-time video, and pictures from the scene, while non-authorised drone pilots were alerted by the system to land immediately. The next demo will focus on long-range, low-level powerline inspection in Läänemaa rural areas in western Estonia.

In August, the GOF U-space demonstrations will continue with a maritime search and rescue exercise involving drones, several aircraft and surface vessels in cooperation with the border guard on August 13 in Hiiumaa, Estonia, long-range forest survey on 16 August, operation in densely populated area with Police cooperation in Helsinki on August 20, and on August 22, international parcel delivery with drones over the Gulf of Finland will take place between Torbacka, Finland, and Muraste, Estonia. The demonstration series will be completed by an urban Volocopter air taxi flight from the Vantaa international airport at the end of August 2019. These trials are open to qualified visitors only.

The GOF U-space project with a broad consortium of 19 members demonstrates that Europe is on course with its implementation of U-space, an initiative that aims to ensure safe and secure drone traffic management, taking into account the rapid growth in the use of drones. The GOF concept enables shared situational awareness for all aviation stakeholders. The success of the project is based on deep Air Traffic Management (ATM) experience of the consortium members, including three world-leading UTM (Unmanned Traffic Management) technology vendors and two Air Navigation Services Providers, developing interoperability and data-sharing solutions which are aligned with SESAR JU’s overall U-space architecture. In addition to air traffic management, large-scale drone use will rely on scalable radio communication systems (e.g. mobile networks) and weather information, which are also trialled in the project.

This U-Space project is one of several research projects of the SESAR Joint Undertaking, which has received funding within the framework of the European Union’s Connection Europe Facility (CEF) programme under grant agreement SJU/LC/343-CTR.