Uber aims to offer aerial ride sharing through its Uber Air application by 2023 in Melbourne, Australia, a target date also set for its other two pilot cities of Los Angeles and Dallas/Fort Worth.

Flight tests of electric-powered vertical takeoff and landing aircraft, known as eVTOLs, would begin in 2020 in all three of these cities, Uber announced on 11 June during its Uber Elevate summit in Washington, DC. Passenger flights would begin in 2023 pending regulatory approval.

Manufacturers building eVTOL aircraft that will be operated by Uber Air’s ridesharing service include Boeing, Bell and EmbraerX. Uber has used its name recognition to rally interest from companies necessary to design technologies and infrastructure like landing pads to support this ecosystem.

This is a “common reference model” from Uber not for manufacture. It shows some technology Uber recommends its airframer partners to use for their aircraft. This includes stacked co-rotating rotors that can retract to reduce drag during forward flight.

Urban air mobility ridesharing could alleviate traffic congestion in Melbourne and other cities by allowing passengers to book short flights between landing pads that Uber calls skyports. With congestion estimated to cost Australia around $30 billion by 2030, Australian officials have encouraged Uber to offer aerial ridesharing in the Melbourne area, says Kate Fraser, head of aviation policy at Uber Elevate.

“Having that support from the local community is huge, which will make it easier when we start to do community engagement,” Fraser says of the process of building public awareness and gaining feedback for aerial ridesharing.

Australian aviation regulators in April granted drone delivery service Wing, owned by Google parent company Alphabet, the right to fly deliveries in Canberra, Australia. Fraser says this has been an “encouraging” sign that Australia is receptive to eVTOL ride-sharing.

US Secretary of Transportation Elaine Chao says at the conference that integrating small commercial drones into US airspace is a learning experience for regulators that will inform the process to bring larger eVTOL craft into service eventually.

The department will address “legitimate public concerns”, including safety, security, privacy and noise “without hampering innovation”, says Chao. Convincing the flying public to commute on these new aircraft in spite of those concerns will be the final challenge for eVTOL manufacturers, Chao says. 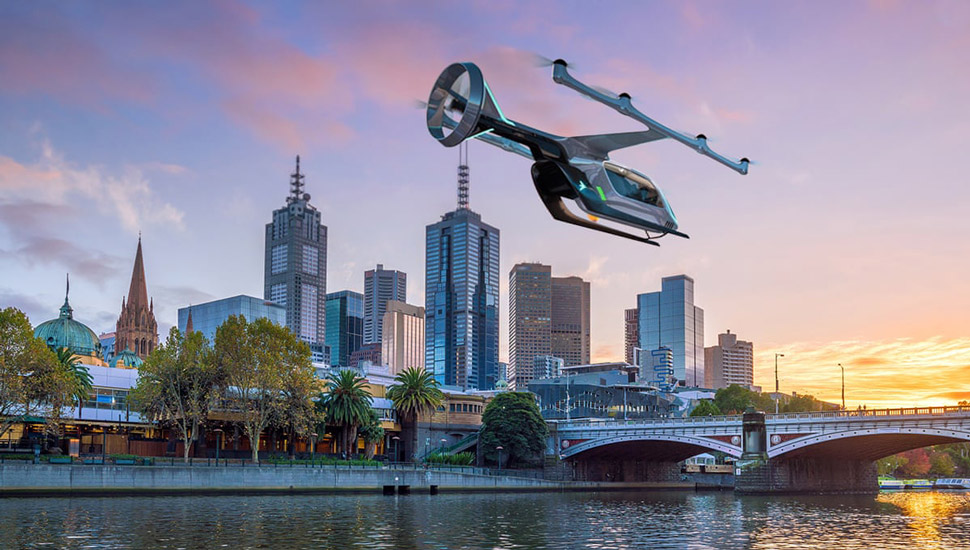 Australian companies Macquarie, Telstra and Scentre Group will also partner with Melbourne Airport and Uber to support an eVTOL ridesharing network, including through connectivity for airspace management to ensure these aircraft fly safely.

“Our network strength, coverage and leadership in 5G, along with our ongoing work on drones and related standards, will support Uber’s incredible technology and innovation to develop a service we have all imagined would one day be possible,” Telstra chief executive officer Andrew Penn says in a statement.

“We will be working closely with Uber over the next 12 months to assess what network infrastructure, connectivity requirements and other capabilities would be needed to support airspace mobility in urban centres.”