The South African National Blood Service (SANBS), the non-profit responsible for vein-to-vein blood distribution, wants to make a big investment in a UAV network to transport blood products. It is waiting for Civil Aviation Authority (CAA) approval to begin a test service.

At a launch of the initiative at North Eastern Radio Flyers near Sandton today (29 May), the Service demonstrated an unusual fixed wing tilt rotor vertical take off and landing (VTOL) drone. It has a refrigeration facility to keep blood products within required temperatures.

Ghana and Rwanda have recently started to transport blood to clinics with the use of drones. The SA blood drone service could soon be a step ahead of these countries. The Service wants to provide patients with their specific types as it is regarded as medical best practice to do so. Ghana and Rwanda only transport O negative blood, the type that is suitable for all recipients.

The SA blood service also plans to transport the product in a refrigerated environment. And it does not want the unit being flown to be subject to potential stresses from catapulting at take-off, and retrieval of the UAV by net, as is done in Ghana and Rwanda. 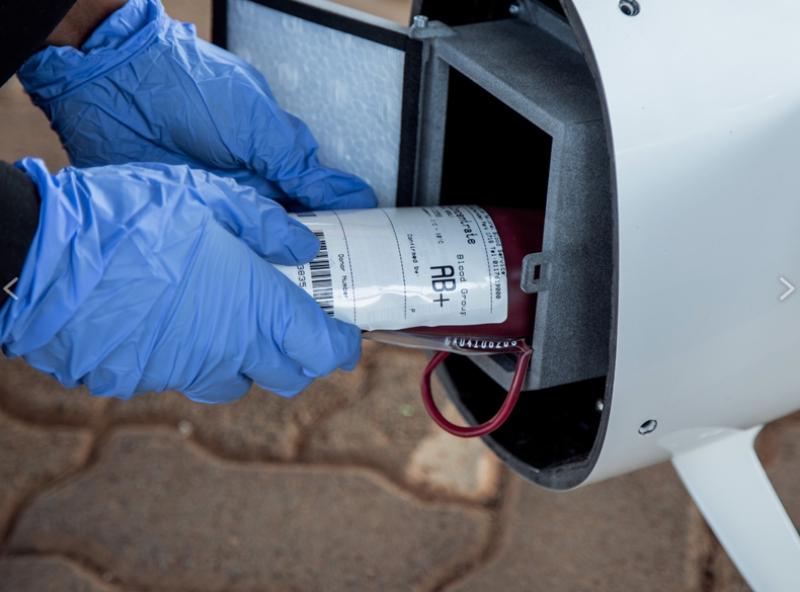 The project would be the first use of a drone in the public health sector in SA. A proposal ten years ago by the SA National Health Laboratory Service to transport blood and sputum samples from rural clinics to laboratories by UAVs was abandoned even though trials were successful.

The suggestion for the Blood Service to use drones came from the KwaZulu Natal health department in talks a year ago about SA’s high rate of deaths from bleeding by woman who have recently given birth at rural clinics. After dropping for a couple of years, maternal deaths in SA rose in 2015, and although it has since fallen, the rate remains high.

In the latest year for which comparative international statistics are available, 138 mothers per 100,000 live births died in SA soon after delivery. This gave SA a rank of 121 out of 183 country positions, with Finland, Iceland, Greece, and Poland in joint top position with 3 maternal deaths per 100,000 live births. Excessive blood loss is a significant cause of maternal death in the weeks following pregnancy.

As part of their proof of concept, the SA National Blood Service’s first drone project will connect two semi-rural hospitals in Gauteng which are about 9 km apart – Sebokeng and Kopanong Hospitals. The hospital locations were chosen because of the large number of patients at these sites, and the need to meet CAA safety concerns about flight paths and location. 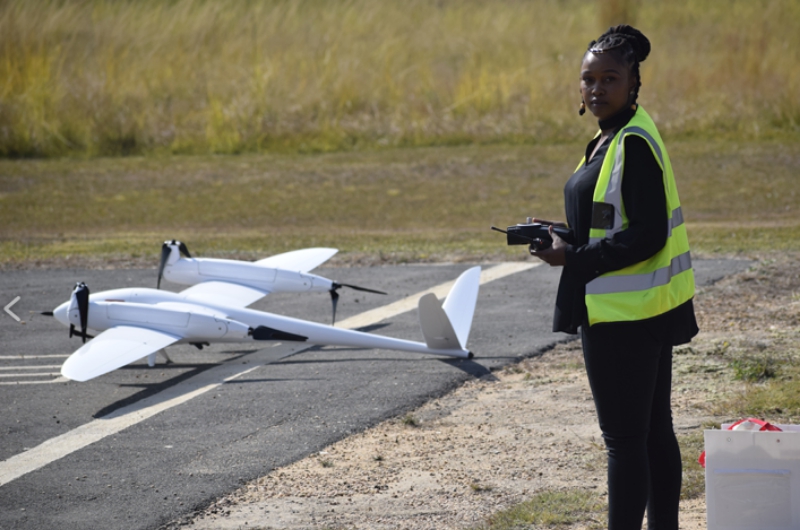 “We believe that this is an innovative step in the history of blood transfusion. SANBS is determined to improve rapid access to life-saving blood products in rural areas through the use of drone technology. Our concept is globally unique in that we will provide two-way logistics; patients can receive emergency “O negative” blood from one of our blood banks via drone. The same drone can then take that patient’s blood sample to the blood bank for comprehensive cross-matching and then safely and rapidly deliver compatible blood back to the patient” says Dr. Jonathan Louw.

The UAV to be used has a range of about 90 km giving it the ability to reach many rural clinics. It is not envisaged that drone transport will replace ground distribution, but it will give the Service an ability to respond quickly to requests for blood required in the “Golden Hour” in which a patient can be saved with a transfusion. With the UAV having the ability to take off and land vertically, the SANBS will be able to pick up a blood sample, transport it back for cross matching at a blood bank, and then deliver the specific blood type required by the patient.

The drone chosen by the blood service, made by a German UAV startup, Quantum-Systems, was initially designed to be used to carry laser equipment for use in aerial surveys. Quantum-Systems calls the UAV the TronF9, but the Blood Service will give it another name.

Quantum’s competitive advantage is in technology designed to transition from a vertical take off into forward flight with a tilting rotor system. SANBS wanted a VTOL solution as it allows landing and takeoffs in fairly confined areas and does not place the blood payload under excessive g-forces. The UAV takes off and lands using four engines, but the rear motors are turned off and their rotors folded inwards for efficient forward flight.

Quantum and SANBS have jointly developed modifications for the aircraft to be used in a blood products transport role. A refrigerated payload bay, key to maintaining the cold chain in the transport of blood products, has been built into the nose of the UAV.

Louw says the project is about saving lives, but insists it makes strong economic sense, particularly if the use of drone transport can be expanded. The most immediate savings will be on the hire of helicopters to transport patients for blood transfusions and often to get blood to rural clinics. Reduction in operating costs would also come from the introduction of greater autonomy in the UAV system, he says. There will be another benefit to the Blood Service. A UAV system will allow greater blood cross matching, which means that stocks of 0 negative blood, the type that can be universally received, will not be under pressure.

Louw declined to reveal the costs, but says a drone costs “about as much as a car”.

Quantum Systems say that if a longer term Blood Service program emerges, they would consider assembly, manufacturing, and jobs in SA

For the moment, the project’s take-off awaits the go ahead of the CAA, and for the results of an internal blood service competition to find a name for the UAV.