Purdue University researchers have engineered flying robots that behave like hummingbirds, trained by machine learning algorithms based on various techniques the bird uses naturally every day.

This means that after learning from a simulation, the robot “knows” how to move around on its own like a hummingbird would, such as discerning when to perform an escape manoeuvre.

Artificial intelligence, combined with flexible flapping wings, also allows the robot to teach itself new tricks. Even though the robot can’t see yet, for example, it senses by touching surfaces. Each touch alters an electrical current, which the researchers realized they could track.

“The robot can essentially create a map without seeing its surroundings. This could be helpful in a situation when the robot might be searching for victims in a dark place – and it means one less sensor to add when we do give the robot the ability to see,” said Xinyan Deng, an associate professor of mechanical engineering at Purdue.

The researchers will present their work on May 20 at the 2019 IEEE International Conference on Robotics and Automation in Montreal.

Drones can’t be made infinitely smaller, due to the way conventional aerodynamics work. They wouldn’t be able to generate enough lift to support their weight.

But hummingbirds don’t use conventional aerodynamics – and their wings are resilient.

“The physics is simply different; the aerodynamics is inherently unsteady, with high angles of attack and high lift. This makes it possible for smaller, flying animals to exist, and also possible for us to scale down flapping wing robots,” Deng said.

Researchers have been trying for years to decode hummingbird flight so that robots can fly where larger aircraft can’t. In 2011, the company AeroVironment, commissioned by DARPA, an agency within the U.S. Department of Defense, built a robotic hummingbird that was heavier than a real one but not as fast, with helicopter-like flight controls and limited manoeuvrability. It required a human to be behind a remote control at all times.

Deng’s group and her collaborators studied hummingbirds themselves for multiple summers in Montana. They documented key hummingbird maneuvers, such as making a rapid 180-degree turn, and translated them to computer algorithms that the robot could learn from when hooked up to a simulation.

Further study on the physics of insects and hummingbirds allowed Purdue researchers to build robots smaller than hummingbirds – and even as small as insects – without compromising the way they fly. The smaller the size, the greater the wing flapping frequency, and the more efficiently they fly, Deng says. 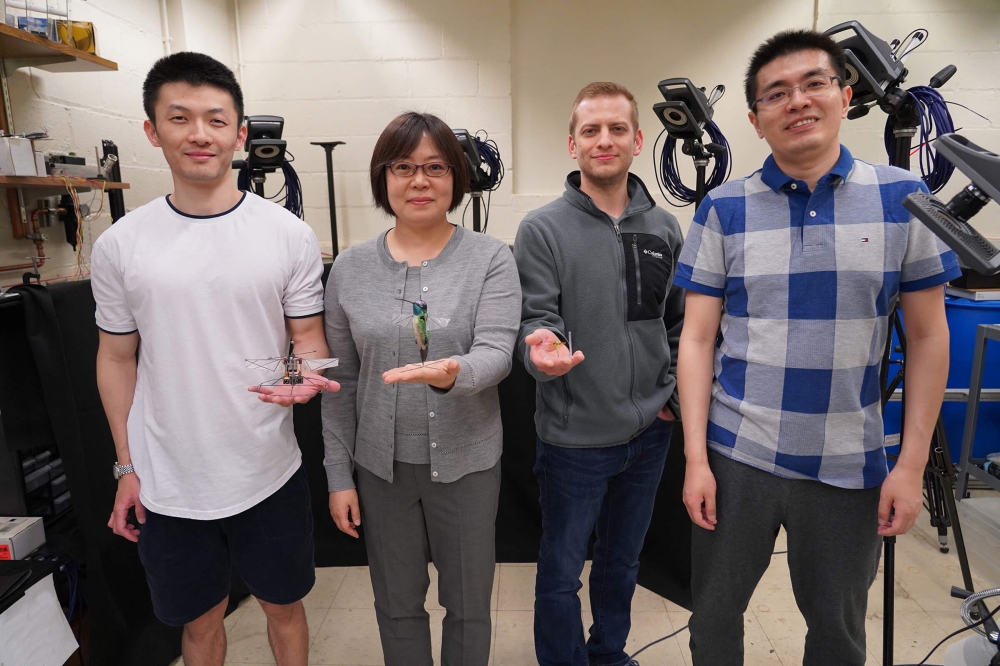 Designing their robots with higher lift gives the researchers more wiggle room to eventually add a battery and sensing technology, such as a camera or GPS. Currently, the robot needs to be tethered to an energy source while it flies – but that won’t be for much longer, the researchers say.

The robots could fly silently just as a real hummingbird does, making them more ideal for covert operations. And they stay steady through turbulence, which the researchers demonstrated by testing the dynamically scaled wings in an oil tank.

The robot requires only two motors and can control each wing independently of the other, which is how flying animals perform highly agile manoeuvres in nature.

“An actual hummingbird has multiple groups of muscles to do power and steering strokes, but a robot should be as light as possible, so that you have maximum performance on minimal weight,” Deng said.

Robotic hummingbirds wouldn’t only help with search-and-rescue missions, but also would allow biologists to study hummingbirds more reliably in their natural environment through the senses of a realistic robot.

“We learned from biology to build the robot, and now biological discoveries can happen with extra help from robots,” Deng said.

Simulations of the technology are available open-source at https://github.com/purdue-biorobotics/flappy.

Early stages of the work, including the Montana hummingbird experiments in collaboration with Bret Tobalske’s group at the University of Montana, were financially supported by the National Science Foundation.