A Singapore firm has unveiled a one-seater flying vehicle that it hopes could be used for door-to-door transportation in urban areas when it is launched in the United States. The personal aerial vehicle, named Crimson S8, is earmarked to launch in California from late next year. It will not be launched in Singapore due to regulations.

The vehicle is currently undergoing indoor trials without an operator on board in Loyang. Neo Aeronautics is looking to fine-tune the model and conduct outdoor trials soon. It may approach the Civil Aviation Authority of Singapore (CAAS) to explore if it is possible to do so here.

The firm is aiming to start flight tests in the US by March next year.

It can fit into a standard American carpark lot measuring around 15 sq m and can fly at a height of 15m with a payload of 100kg.

It will have a maximum speed of 100kmh. The current development model can stay airborne for about 20 minutes, but the company plans to improve the limit up to at least 60 minutes.

The vehicle has the capability to fly on autopilot, or be manually controlled by the pilot. 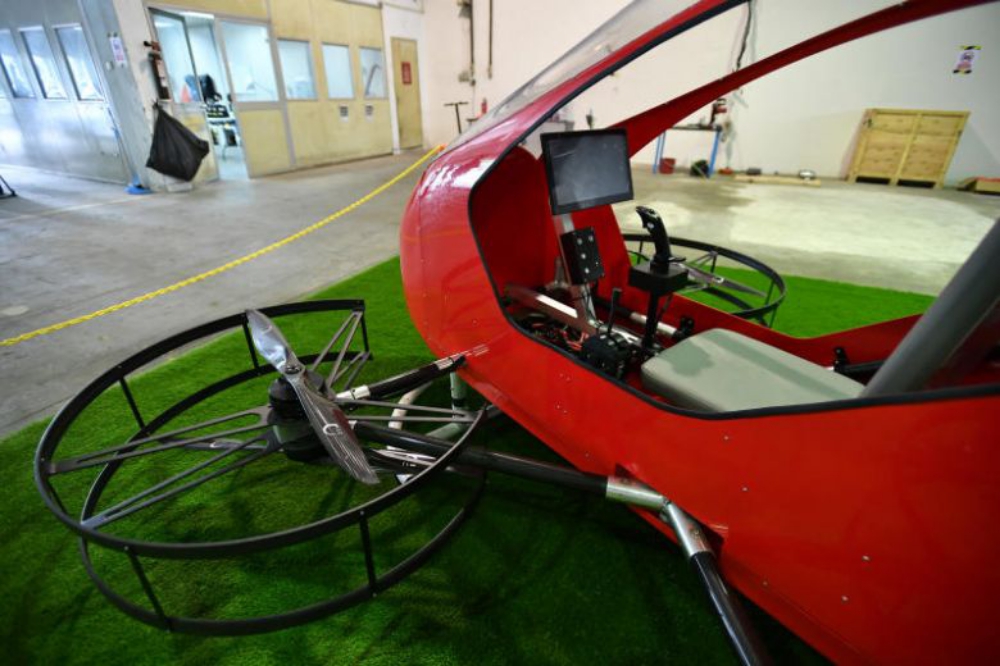 Associate Professor (Adjunct) Neo, who teaches innovation and technology commercialisation at the National University of Singapore, said the Crimson S8 is designed to fit into the ultralight category set by the US Federal Aviation Administration. This means that any potential operator will not require a pilot licence to fly the vehicle.

“Flying the Crimson S8 fulfils our aspiration that everyone can fly as it is as simple as operating a drone,” he said.

He started the company in August last year and built the Crimson S8 with three other engineers. He has invested more than $200,000 of his own money into the project.

In the long term, he plans to offer the Crimson S8 on a membership-based scheme.

“If we sell unit by unit, not many people can afford it. We are going for the masses so we go by membership services, and we will take care of maintenance and upgrading,” said Prof Neo.

Members will need to go through a two-hour training session before they can fly the vehicle.

Prof Neo hopes that regulations will evolve over time to allow the Crimson S8 to launch in Singapore and in other cities, and he will explore opportunities to work with the authorities.

“We are now focused on human flight, but we can adapt the vehicle for logistics flights,” he said, adding that it is possible for the vehicle to be a “heavy lifter from sea to shore”.

“Unlike many countries where UAS (unmanned aircraft system) operations are generally confined to the rural and less populated areas, the Singapore context means that regulators and operators must from the onset deal with the challenges of operating within a complex and dense urban landscape,” he said.

“Neo Aeronautics has not approached CAAS to operate in Singapore. To facilitate trials, CAAS needs to ensure that the risks associated with such trials are adequately mitigated so that public and aviation safety are not compromised.”

He added: “That is why we require prototypes to undergo stringent safety evaluations and satisfy strict technical requirements before they can be allowed to fly. CAAS has also designated ‘Regulatory Sandboxes’ and ‘Drone-Estates’ to facilitate the conduct of proof-concept trials for innovative drone use-cases within a controlled environment.”

Development of flying vehicles that could be used for personal air transport with autonomous navigation has been picking up speed worldwide.