The Indian government’s policy regulatory framework for drone usage is yet to be frozen, but that hasn’t stopped startups from looking at using unmanned aerial vehicles (UAVs) in our day-to-day lives. Enter Redwing Aerospace, a Bengaluru-based drone delivery startup, that isn’t looking at drones for delivery of food or ecommerce. It aims for a deeper use-case perspective.

“Logistics is about getting something from point A to point B. Drones let you do that much faster. So why not use them for something that can solve a real problem?” asks Anshul Sharma, Co-founder and CEO, Redwing Aerospace, which sits out of the WeWork Galaxy space in Bengaluru.

When Anshul, an ex-NTU Singapore Researcher, had the idea, he immediately contacted two friends from his Manipal Institute of Technology days – Rishabh Gupta and Arunabha Bhattacharya. 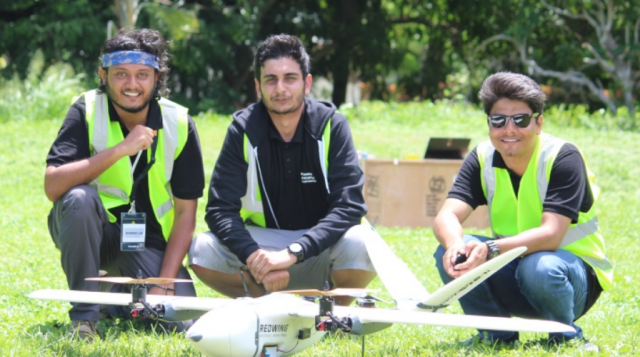 Focusing on this idea, the team decided to use drones to deliver medicines, vaccines, and blood to the remotest parts of the world. In these regions, getting a truck, van, or even a bike to deliver medical essentials is next to impossible.

The trio had always been interested in drones. While at college, they participated and won several projects by NASA, Airbus, Boeing, and Lockheed Martin. Work, nevertheless, took them to different places. Arunabha is a former officer on Special Duty at National Technical Research Officer (NTRO) in Chhatisgarh while Rishabh worked as an insurance surveyor.

“The idea of using drones for logistics, especially in the healthcare space, was too lucrative to miss,” Rishabh says.

Arunabha says the idea was to test and see how far drone flights could go. They got the prototypes, spending a few lakhs, tested them, and then decided to get them tested for a Civil Aviation Safety Authority (CASA), Australia, certification. The company is currently bootstrapped.

“We had built our prototypes at the Manipal Group, where we had access to the labs, and even had them tested there,” Arunabha says.

In 2018, Redwing Aerospace was selected to be a part of the Techstars US accelerator programme. Through this, they were contacted by WeRobotics, a not-for-profit organisation, that has head offices in Switzerland and the US and focuses on deep-tech solutions for problems.

“Through WeRobotics, we worked for a large US-based government health agency to use cargo drones to supply medicines in polio-struck Papua New Guinea,” Anshul says. He adds that while the team ensured the drones were functional, they also made sure that deliveries were quick and successful.

“These are regions where UNICEF employees themselves would take three days to cover 30 km. Thus, speed and safety are imperative,” Rishabh says.

The Redwing Aerospace team had to focus on the operational stack and logistical support to ensure speedy and safe deliveries. The team needed to build roughly 25 to 30 drones for close to 5,000 deliveries. Currently, one drone does close to 180 deliveries a day.

As the drone is primarily used for medicine deliveries, it has an inbuilt temperature logger that notes the temperature of the vaccines during the flight. “We gave this data to the health agency to test and certify,” Anshul says.

The delivery works on a hub-and-spoke model. The team gets a message on the inventory needed. This is loaded at the central hub , and the drones take off, after the regular pre-flight tests and checks of wind conditions, audio pilot systems, and GPS tracker. The coordinates are fed into the systems and the health examiner picks up the vials at the drop-off point.

India’s drone policy as of now necessitates UAVs to be in the line of sight, which is why Redwing cannot operate here. However, the team hopes that the regulations will soon change in their favour.

Be it agriculture, surveying, surveillance, or traffic monitoring, drone tech is here to stay. India has over 35 drone-based startups, but only two of them – IdeaForge and Aarav Unmanned Systems – have managed to scale up beyond Rs 4 crore. Of the 35 startups, only five are generating more than Rs 20 lakh; the rest are registered but have no revenues to show.

However, the Redwing team believes if you give value, “there will be money”.

“We have done close to 10 paid deliveries,” Rishabh says. The team is looking for more tie-ups to work on deliveries, and is in the process of working with 10 countries, like Panama, Africa and few others where some regions are remote and accessibility is a problem.