Skyvision was developed in a collaboration between AFRL and the State of Ohio.

The SkyVision technology safely, accurately and effectively allows drones to detect and avoid other aircraft while in flight. SkyVision can be described as an air traffic control system for drones.

The validation of this aviation technology led the FAA to grant AFRL a certificate of authorization to test defense-related drone technology without reliance on a visual observer or chase aircraft.

Typically, drones can only fly within the uninterrupted line of sight of the person operating the UAS, but this special waiver allows AFRL and the Ohio UAS Center, which is part of the Ohio Department of Transportation’s DriveOhio Initiative, to use SkyVision to test drones beyond the visual line of sight (BVLOS) within a 200-square-mile parcel of unrestricted airspace near the Springfield-Beckley Municipal Airport.

“As our country steps more and more into the unmanned age of flight, this technology is on the forefront of the aviation frontier, making Ohio a critical national asset for the research and development of UAS technology,” said Governor DeWine. “This also opens the door for commercial companies to work with Ohio, AFRL, and the FAA to test their own UAS-related technology using our SkyVision detection system. This is a major step in revolutionizing the transportation industry, with Ohio leading the way in aerospace, defense, and aviation innovation.”

“This is an important development in the progression of unmanned aircraft,” said Major General William Cooley, Commander of AFRL at Wright-Patterson Air Force Base. “This waiver provides the latitude to test beyond-line-of-sight keeping AFRL on the leading edge of world-class research and accelerates the delivery of technology that makes a difference to the warfighter.”

“By enabling our lower-altitude airspace for advanced modes of transportation, we’ll be able to facilitate new opportunities around advanced autonomous aircraft research and development,” said Lt. Governor Husted. “This will bring investment to Ohio and solidifies Ohio’s position as a world- recognized leader in aviation technology.” 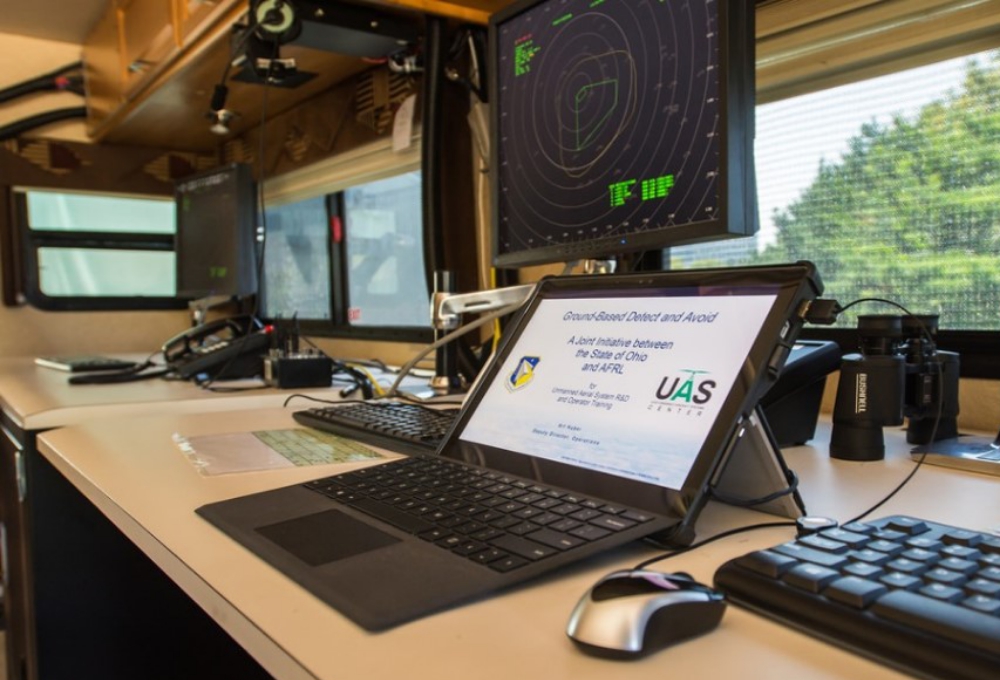 Ohio’s SkyVision detection system could potentially be used by the state to develop and test UAS technology to assist citizens in the event of a natural disaster or to significantly enhance the capability of search and rescue teams to find missing persons in time-critical situations. Commercial companies, such as those looking to use drones to survey damaged infrastructure or hoping to launch drone commerce operations, will also now have incentive to move to Ohio to test their own UAS technology.

VyrtX, a company based out of Dayton, is among the first companies that has committed to expand into Springfield to work with AFRL and the Ohio UAS Center. VyrtX is currently developing technology for the potential transport of organ donations between hospitals for transplant surgeries.

UAS test flights will take place at heights ranging from 1,000 feet above ground to 10,000 feet mean sea level. Air traffic control experts from the Ohio UAS Center will operate SkyVision during each flight. The SkyVision detection system is located within a mobile unit so that it can be flexibly placed in optimum positions for each flight.

“Today’s announcement comes after years of hard work and collaboration among an incredible group of partners,” said Jeff Hoagland, President and CEO of the Dayton Development Coalition. “AFRL and Ohio had a bold vision to bring UAS into the national airspace for true beyond-visual- line-of-sight flight. The work done here will shape the industry for years to come.”

The State of Ohio and AFRL both invested a combined $5 million for the research and development of SkyVision.

Supported by the Ohio Department of Transportation, DriveOhio works to ensure Ohio’s regulatory environment and public policies are conducive to the development of the infrastructure and technologies needed for smart mobility.