The Defense Advanced Research Projects Agency (DARPA) has given further details on the capabilities of its Collaborative Operations in Denied Environment (CODE) program aims to adapt and respond to unexpected threats for existing unmanned aircraft that would extend mission capabilities and improve U.S. forces’ ability to conduct operations in denied or contested airspace.

DARPA announced that some success has been achieved and a swarm of unmanned aerial vehicles equipped with CODE successfully carried out mission objectives, even when communications were offline and GPS was unavailable.

On a brisk February morning in the Yuma, Arizona, desert, a swarm of unmanned aerial vehicles equipped with DARPA’s Collaborative Operations in Denied Environment system, or CODE, successfully carried out mission objectives, even when communications were offline and GPS was unavailable.

One-by-one, six RQ-23 Tigersharks lifted off, fitted with an array of sensors onboard. Next to the runway at the U.S. Army’s Yuma Proving Ground, the mission team inside a small operations center tracked the aircraft and as many as 14 additional virtual planes on an aerial map. The capstone demonstration paired program performer Raytheon’s software and autonomy algorithms and Johns Hopkins University Applied Physics Laboratory’s White Force Network to create a realistic, live/virtual/constructive test environment. During four demonstration runs, the team activated a variety of virtual targets, threats, and countermeasures to see how well the Tigersharks could complete their objectives in suboptimal conditions. 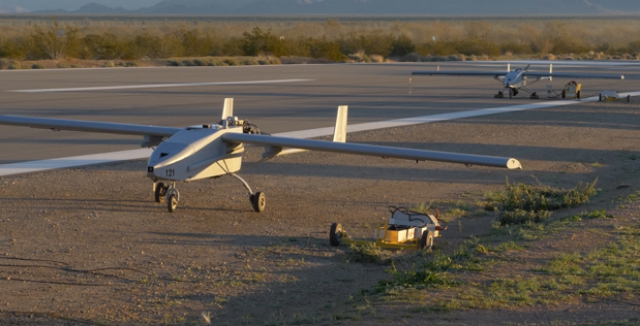 “Exactly how the aircraft continue to work together in degraded conditions is the most challenging aspect of this program,” said Scott Wierzbanowski, the DARPA program manager for CODE in the Tactical Technology Office. “Current procedures require at least one operator per UAV in the field. Equipped with CODE, one operator can command multiple aircraft; and in a denied environment, the aircraft continue toward mission objectives, collaborating and adapting for deficiencies.”

Before, if operators lost communications with a UAV, the system would revert to its last programmed mission. Now, under the CODE paradigm, teams of systems can autonomously share information and collaborate to adapt and respond to different targets or threats as they pop up.

“CODE can port into existing UAV systems and conduct collaborative operations,” said Wierzbanowski. “CODE is a government-owned system, and we are working closely with our partners at the Air Force Research Laboratory and Naval Air Systems Command to keep each other informed of successes and challenges, and making sure we don’t replicate work. In the end, our service partners will leverage what we’ve done and add on what they need.”

The Tigersharks employed in the demonstration are surrogate assets for CODE. Each has about one-tenth the speed and performance of the aircraft planned for integration, but shows traceability to larger platforms. Constructive and virtual threats and effects presented by the White Force Network are appropriately scaled to the Tigersharks’ capabilities.

“It’s easy to take the CODE software and move it from platform to platform, both from a computer and vehicle perspective. It could be a manned aircraft, unmanned aircraft, or a ground vehicle,” said J.C. Ledé, technical advisor for autonomy with the Air Force Research Laboratory. “The concept for CODE is play-based tactics, so you can create new tactics relatively easily to go from mission to mission.”

The Naval Air Systems Command (NAVAIR) will take ownership of CODE after DARPA closes out the agency’s role in the program this year. It already has built a repository of algorithms tested throughout the development process.

“What we’re doing with the laboratory we set up is not just for the Navy or NAVAIR. We’re trying to make our capabilities available throughout the entire DoD community,” said Stephen Kracinovich, director of autonomy strategy for the Naval Air Warfare Center Aircraft Division (NAWCAD). “If the Army wanted to leverage the DARPA prototype, we’d provide them not just with the software, but an open development environment with all the security protocols already taken care of.”

Kracinovich says NAWCAD has a cadre of people with hands-on knowledge of the system, and is ready to help port the capability to any other DoD entity. That ease of transition puts CODE technologies on a clear path to assist deployed service members by enabling collaborative autonomous systems to operate in contested and denied environments with minimal human supervision.