There is a plethora of combat equipment, otherwise referred to as APS, on U.S. Military installations throughout the KTO which are essential to the overall readiness of The United States Forces, Korea. Units that fall under 8th Army are required to routinely conduct mechanical validations and rehearse the movement and integration of APS within the KTO.

UAS pose an unprecedented threat to units in every branch of The United States Armed Forces in both tactical and garrison environments. UAS have the capability to conduct surveillance on military operations and can be modified to carry ordnance in order to directly attack critical assets. The proliferation of relatively cheap commercial off-the-shelf (COTS) UAS in the private market exacerbates the problem. However, new technologies allow units such as E/6-52 AMD to combat this emerging threat. E/6-52 is the only unit in the Army that conducts C-UAS operations in both tactical and garrison environments, and simultaneously maintains organic Avenger and Sentinel capabilities.

In January 2019, E/6-52 received orders to provide C-UAS protection in the garrison environment on Camp Carroll, South Korea, which included the integration of new systems into normal Short Range Air Defense (SHORAD) operations. Ultimately E/6-52, under the 2-1 ADA “Guardian” Battalion, set a new precedence that significantly changes the capabilities that a single Avenger Platoon can bring to the table. This is the concept that an Avenger Team can not only dismount with a shoulder-fired Stinger Missile (or MANPADS), but they are also equipped with a highly portable Drone Defender system for UAS engagements. This further layers our defense of assets and increases the ability to protect all aspects of the battlefield. 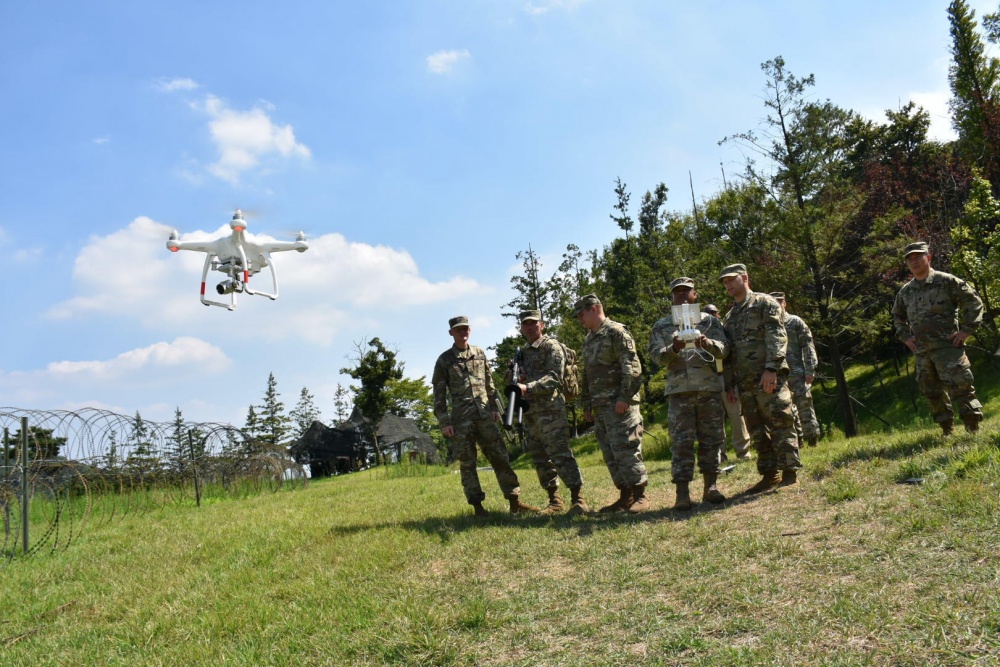 Leaders within Echo Battery used the Military Decision Making Process format to create a base defense design that adhered to ADA employment principles of mix, mutual support, mobility, mass and integration. The defense design consists of organic SHORAD capabilities and C-UAS systems, using the “mix” employment principle, which is “the employment of a combination of weapons systems to protect the force from the air threat”.

The platoon tactical operations center (TOC) was co-located with the Sentinel Command and Control (C2) Node, which contained the Forward Area Air Defense (FAAD) display, and the static C-UAS system. The C-UAS system was emplaced within close proximity of the defended assets to provide a C-UAS protective sphere around the area of responsibility (AOR). The Sentinel Radar sent air tracks to the nearby Avenger Weapon Systems and to the FAAD display in the TOC, integrating the SHORAD systems.

Avengers were emplaced with primary target lines (PTL) facing the most likely air avenues of approach for hostile UAS as an additional layer of protection. The Avengers were emplaced to provide mutual support by positioning the weapon systems so that the fires of one weapon system could engage targets within the dead zone of the adjacent weapon system. Additionally, the Avenger crews were equipped with a Drone Defender, a man-portable C-UAS system that has a planning range of 500 meters and encompasses the “mobility” employment principle. The Drone Defender allows the crewmembers to non-kinetically engage UAS from any direction up to 500m. One crew member manned the turret of the Avenger at all times and used the FLIR and air picture from the Sentinel Radar to search and scan for incoming aircraft or UAS.

The eight-day operation allowed for leaders of other units to see and explore the capabilities that E/6-52 has to offer. The initial emplacement took two hours from start to finish. Leaders of Echo Battery plan to reduce the emplacement time in order to expeditiously provide C-UAS protection to any operational environment in the KTO. Additionally, this mission validated the ability to conduct C-UAS operations on 8th Army installations with successful results.

The official mission of the Air Defense Artillery (ADA) branch is “to protect the force and selected geopolitical assets from aerial attack, missile attack, and surveillance” (FM 44-100). The U.S. Military invested heavily in Air Defense and developed weapon systems that could eliminate any threat to their force or geopolitical assets since its inception. Air threats can present themselves at vastly different altitudes, so ADA split itself into two main domes of responsibility: High to Medium Range Air Defense (HIMAD) and Short Range Air Defense (SHORAD).

ADA counters threats at all altitudes with its wide array of systems and capabilities. The Patriot and Terminal High Altitude Area Defense (THAAD) missile defense systems were developed and designed to detect and eliminate ballistic missile threats, while the Avenger weapon system was primarily developed for protection against fixed-wing and rotary-wing aircraft and UAS. 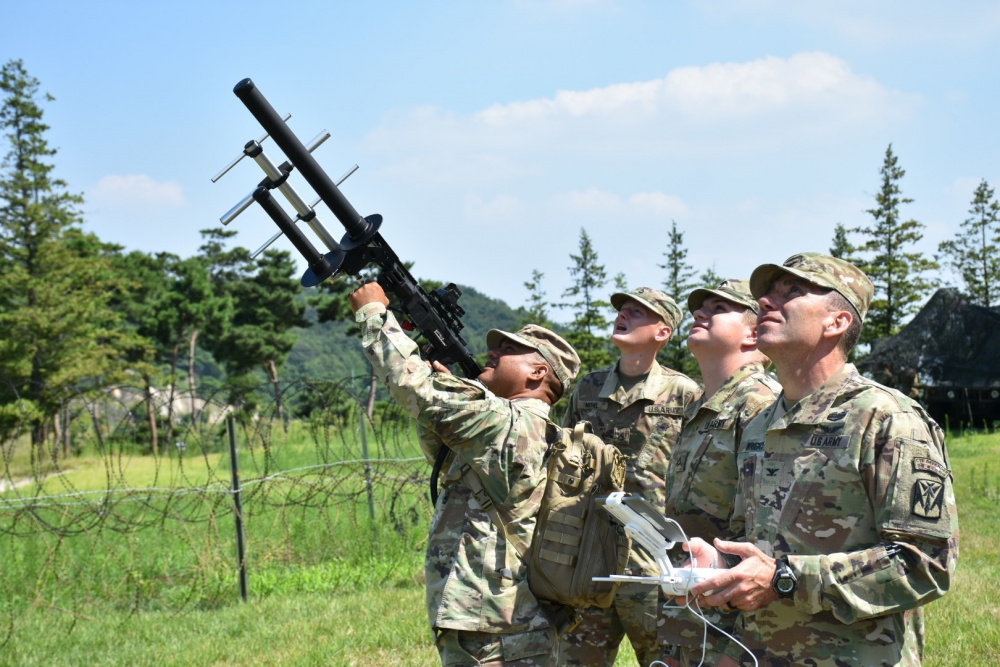 The Avenger weapon system is equipped with eight FIM-92 Stinger Missiles, a M3P .50 caliber machine gun, forward looking infrared (FLIR), and has interoperability capabilities with the Sentinel Radar that gives it slew-to-cue capabilities. Furthermore, the operators can convert the stinger missiles to Man-Portable Air Defense Systems (MANPADS) and conduct operations as shoulder-mounted Stinger teams. These capabilities allow Avenger platoons to be attached to ground force units.

For the last two decades, the U.S. became immersed in asymmetrical warfare and faced a different aerial threat in the form of rockets, artillery, and mortars. Terrorist groups lacked an air force, so the need for organic SHORAD Avenger units and Stinger teams diminished. However, new technology has advanced UAS as an emerging low cost threat.

UAS are categorized into five Groups according to their size and capabilities. Group I and II UAS are low, slow and small UAS that are incredibly inexpensive in comparison to Group III and above, which are typically described as “military grade” UAS. Group III-V UAS are typically only used by near-peer and peer adversaries and are operated at higher altitudes, longer ranges, and are hard to detect.

UAS which fall into Groups I-II and are exceptionally easy to purchase and use. The accessibility of these products has extraordinarily increased their overall use. Not all UAS operators have hostile intent – many are just drone enthusiasts. However, foreign adversaries and insider threats can utilize COTS UAS to cause significant damage to military operations and critical assets. Distinguishing between a hobbyist and a real threat has generated a problem for the U.S. Military and the third pillar of the Air Defense Mission, “surveillance.” The utilization of UAS by adversaries has been nicknamed the “Poor man’s air force” and provides a number of advantages for those who use UAS in the operational environment.

First, it provides an economic advantage. The loss of a $250 Group I UAS would not be as catastrophic compared to the loss of a multimillion-dollar aircraft and its pilot with thousands of hours invested in the pilot’s training. Additionally, in order to defeat a UAS, the benefit has to exceed the cost. The Patriot weapon system can easily destroy a UAS with different types of interceptors. However, these interceptors range in cost from $2-6 million, while a UAS can cost as little as $100. In a battle of cost attrition, the U.S. would lose in this scenario.

The second advantage is the ability to modify UAS to carry payloads. A payload is any additional weight added to the UAS. A camera with better recording capabilities or an improvised explosive device could serve as a UAS payload. Both pose a significant risk to military operations.

Finally, multiple UAS can be used in a coordinated attack in the form of a swarm. Today every major event utilizes synchronized drones to display complex moving images from the sky. Foreign adversaries possess the same technology and can use UAS swarms with the intent to overwhelm defense systems and attack critical assets. Because of this revolutionary threat, ADA has been forced to adapt accordingly.

E/6-52, currently attached to 2-1 ADA at Camp Carroll, South Korea, has taken the lead of exposing and defeating these threats while simultaneously maintaining organic Avenger and Sentinel skills on the Korean Peninsula. Leaders within Echo Battery developed and implemented training programs for several new, non-program of record C-UAS systems in the Korean Theater of Operations (KTO). The certifications for each C-UAS system ensures Soldiers know and understand the capabilities and limitations of these systems as well as the enemy capabilities and employment techniques.

In the past, the demand for proficient C-UAS operators has been exclusive to the tactical environment – an environment with clearly defined rules of engagement. The threat now pervades both tactical and garrison environments. Most military bases in the KTO are surrounded by highly populated civilian areas with growing numbers of drone enthusiasts, making it difficult to distinguish between civilian hobbyists and possible enemy incursions. It is almost impossible to know who is operating a UAS and what their intentions are.

E/6-52 has been at the forefront of protecting friendly forces in the KTO from UAS threats since November 2017. The 35th Air Defense Artillery Brigade has developed a flyaway package to defend military bases and assets against aerial threats; especially the emerging and advancing UAS capability. The purpose of the flyaway package is to provide C-UAS protection to friendly forces across the KTO at a moment’s notice.