The new automatic Facade Scan tool of UgCS for drone inspection mission planning is a time and cost saver for construction, engineering and mining industries.

Various tools for surveying horizontal surfaces, even the uneven ones, have been developed to a high standard and are widely available on the market. Inspecting vertical surfaces is a completely different story — previously it required a lot of manual work and so was a burden for professional drone users. But now, with the automatic Facade Scan tool from UgCS, this has changed.

Making accurate digital models of buildings or cultural heritage objects, and finding heat leaks or damage to walls: these are some of the applications of the new Facade Scan tool for construction and architecture. The tool allows the drone operator to draw a vertical plane, and to specify the distance to the wall, as well as side and forward overlap. The optimal flying path is then calculated automatically. UgCS supports the import of 3D objects and custom DEM data using the terrain-following function.

The tool is also extremely useful in mining, making it possible to examine open quarries. Drone inspections are not only a cost-saving measure for mining companies, they also save humans from having to do the most dangerous work. Drones can be used to survey even unstable pits from a safe distance, and the data gathered will be much more accurate compared to other methods that don’t involve workers climbing down the pit. As mines can often change due to work and natural conditions, repeated drone inspections can bring data up-to-date in a fast and convenient way. 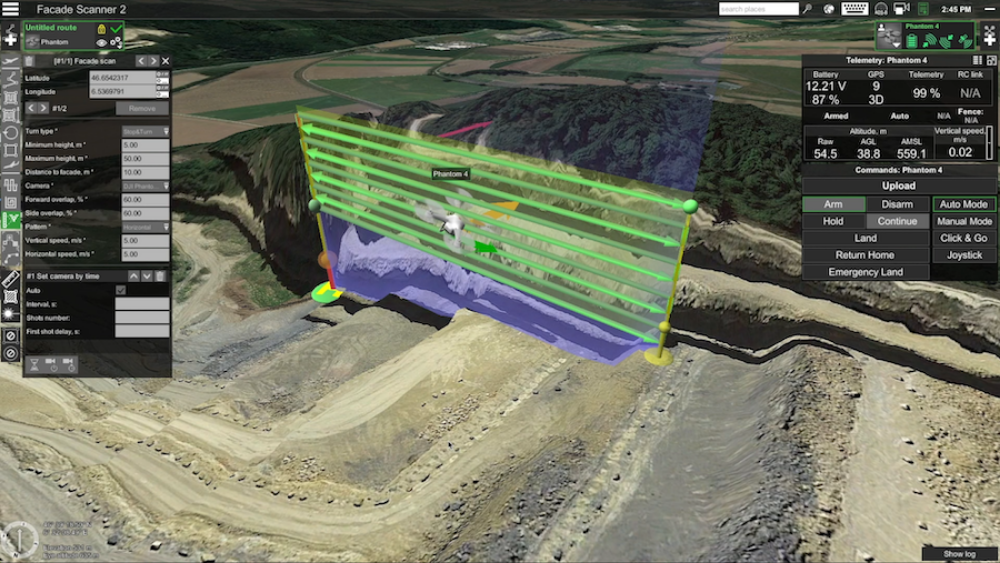 “With its choice of automatic and manual tools, UgCS is extremely versatile, and suitable even for the most specific needs,” says one mining professional. “We can use several different drones for the same mission, or a number of different drones with different kinds of sensor . If a drone runs out of battery, there is no need to start a new mission — it can be resumed where it was interrupted. We also appreciate the terrain following mode that allows drones to follow the surface accurately — we use it for both horizontal and vertical surveys.”

Facade scan is part of the UgCS 3.2 release, joining the family of other automatic UgCS tools: the Photogrammetry tool, Search Pattern tool and Area scan. It is available under a lifetime license, or a temporary license of between 1 and 3 months. UgCS supports most DJI drones, as well as MAVLink compatible and other UAVs. SPH Engineering will keep updating the Facade Scan tool and welcomes comments from professional drone users across all industries.