US Navy to Test Electronic Warfare Drones this Fall

The Dash X is a foldable Class II UAV – manufactured by VX Aerospace – that can loiter on targets for over 10 hours and carry electronic warfare payloads. (VX Aerospace)

Complex electronic warfare (EW) platforms – such as the U.S. Navy’s EA-18G Growler – could soon release swarms of drones from the aircraft, allowing the smaller vehicles to fly ahead to scout out for radar and other battlefield emitters, and potentially even take part in electronic attack missions themselves by jamming enemy sensor networks.

The concept is part of a project the U.S. Navy is working on with Northrop Grumman known as Remedy.

As part of the program, a small Class II unmanned aerial vehicle (UAV) – developed by North Carolina-based VX Aerospace – would be packed into a cluster munition canister that would then eject from a “mothership” and fly a programmed route ahead of stand-off jammers and strike aircraft.

The small drones – outfitted with various payloads including electronic support measures (ESM) or electronic attack jammers – would integrate a datalink to send information back to manned aircraft for either immediate tactical use or intelligence planning for later missions. The small UAVs, which are difficult to detect, owing to their size and slow speed, would get “up close and personal” to radar systems allowing them to perform novel jamming techniques, and even infiltrate command networks to perform cyberattacks.

“It gives me more ‘attack surfaces’ to get at the enemy radar,” said John Thompson, Northrop Grumman’s director of business development for airborne C4ISR. “And because I’m so close, I can now hear more details or hear signals that previously vehicles that were further away couldn’t receive simply because of the physics.”

Since first unveiling the technology in 2017, Remedy has matured “substantially”, company leaders said. The UAV, known as the Dash X, has flown trials in which operators onboard a Northrop Grumman test aircraft controlled the drone to hunt and locate electronic targets. This fall, Northrop Grumman plans to take this concept further by linking the drone with an actual U.S. Navy Growler as part of Fleet Tactical Grid (FTG) 2019, organized by Navy Warfare Development Command.

“This is the first time it has been done with a gray airframe, an actual EA-18G Growler,” said Thompson

Thompson noted that the trials this fall will demonstrate the tactical utility of sending forward a drone and will likely support a future decision by the Navy to embed software into the Growler that enables manned-unmanned teaming. This teaming concept has flourished in recent years because of the benefits it promises to deliver for deployed forces, not the least of which is increased survivability for manned platforms in contested areas.

Northrop Grumman has already worked with the Navy on a project to “mesh together” Growlers into a common data environment. This is now expanding to include other air vehicles – including unmanned aircraft – in order to “see the [electronic support measures] environment as a team” using common data standards.

However, the trials will not include launching the drone launched from the Growler. Instead it will take off and land from the ground as normal. VX Aerospace continues to develop the canister ejection system – utilizing a Tactical Munitions Dispenser nicknamed the “hotel” by the company – which has to ensure the small UAV can survive the extreme temperatures and maneuvers before, during and after release. 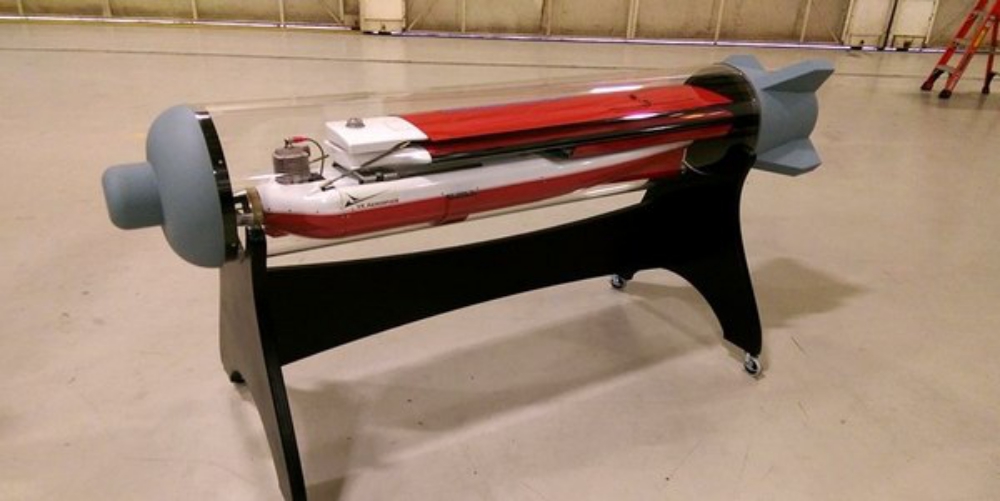 Flight clearance for the modified dispenser and subsequent release trials are the next stage of the roadmap after proving out the software integration. When this will occur is still not known.

Thompson said the company is currently seeing the most interest in equipping the Super Hornet and Growler tactical fleet aboard Navy carriers, enabling a forward-deployed loitering capability ahead of strike packages. It is expected that the dispensing aircraft for the EW drone could be the Super Hornet, replicating how the two aircraft types perform kinetic operations together against enemy radars with high-speed anti-radiation (HARM) missiles.

“An anti-radiation missile is an unmanned ESM device that is moving into the environment, 50 to 100 miles in front of the battle force,” explained Thompson. “We give those missiles data and those weapons communicate back to the airframes as well. This is now just a different idea, instead of it being a high-speed HARM, in this case Remedy is a low-speed loitering ISR weapon that’s in the space.”

In the future, these small UAVs could be released from other airborne assets such as the P-8 Poseidon or helicopters to monitor the electronic battlespace for missions such as anti-submarine warfare or wider surface fleet protection to decoy incoming missile threats. Northrop Grumman is also exploring future concepts that would see Remedy swarms used by land forces for EW roles such as disrupting enemy C2 networks.