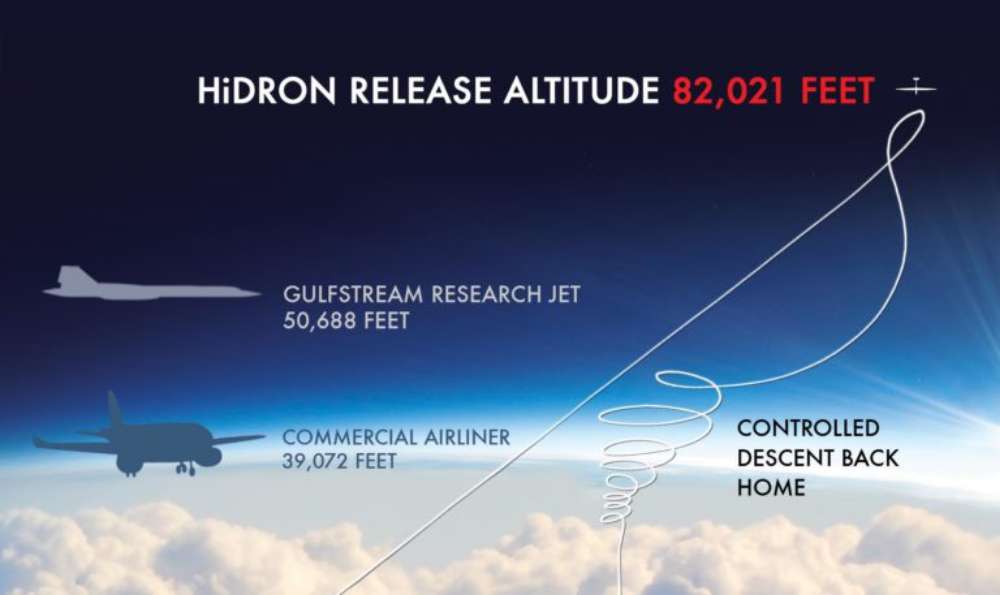 Stratodynamics Aviation Inc. has successfully completed the next stage of flights tests of the earth observation platform called the HiDRON to an altitude of 25 km (82,000 ft).

The HiDRON also carried atmospheric measurement system onboard for measuring ozone and meteorological data, in a collaboration with researchers from the University of Kentucky. The night-time flight lasted 4 hours, including the one-hour weather balloon launch period with an average climb rate at 6.8 m/s (22 ft./s). At release altitude the HiDRON was 36 km (22 mi.) away from the launch site where it headed home and was above launch area at an altitude of 18 km (59,000 ft.). The HiDRON then glided near the home position with a descent rate much slower than a comparable parachute-borne instrument. The return flight home lasted about 3 hours.

According to the mission team, the HiDRON stratospheric aircraft performed well in standard operational modes and in challenging BVLOS (Beyond Visual Line Of Sight) conditions. It operated in headwinds up to 180 km/h (112 mph), -60° C (-76° F) temperatures, experienced wing icing and reliably returned home and landed autonomously.

The HiDRON’s flight stabilization after balloon release and tuning the UAV controls and components for stratospheric flight were main objectives of the mission. During the flight, operators also checked the performance of the HiDRON’s avionic systems, flight characteristics, safety features, instrument integration, and auxiliary tracking systems including a transponder. 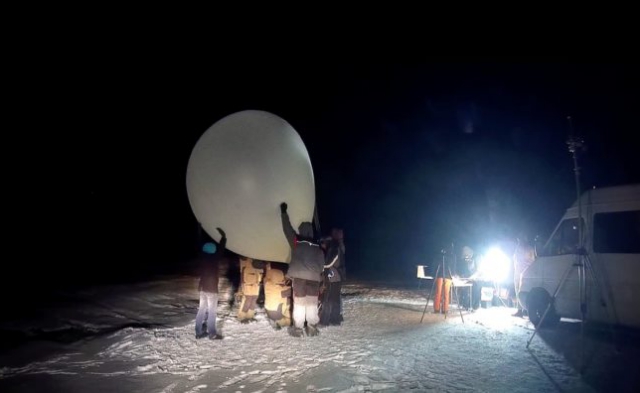 The HiDRON’s payload measured and collected meteorological data and the atmospheric instruments were integrated with the autopilot telemetry and the sensors custom fitted to the aircraft.  Data was collected at the ground station in real-time and compiled with the flight records. The instrument integration was also evaluated. While areas for further refinement were identified, the HiDRON and onboard measurement system performed well and demonstrated operability in high winds, cold temperatures, and low air density conditions.   The obtained performance data will be used for the next stage of testing at an altitude of 30 km (98,000 ft.).

The high-altitude flight was conducted in collaboration with the regional Air Traffic Control Agency. The night-time flight was preferred to minimize impact on commercial air traffic. The HiDRON passed through commercial airspace twice, on the ascent and descent, and an adjustment to civilian aircraft routes was made during flight window. A backup UAVOS live-linked ground station and operator were stationed at the Air Traffic Control center, (multiple ground control stations can be synchronized from different locations). This enabled the mission team and air traffic control staff to track the aircraft’s position from the ground station and onboard transponder. Air traffic control staff indicated the transponder was sufficient for subsequent flights.

“The HiDRON performed well in challenging winter winds and night conditions. At the 25km launch altitude, the HiDRON travelled 36 km from home. The return glide was controlled and, at an altitude of 18 km, the HIDRON was above the home position where it loitered in a slow descent down.  Even with a build-up of ice on the wings, from passing through low-level clouds, the HiDRON landed autonomously. The test demonstrated the HiDRON’s aerodynamic capabilities and avionic system reliability.”

“We also undertook studies of the descending wind stream structure in the stratosphere to increase the duration of the HiDRON flight. In addition, our specialists developed a control and tracking system for an unmanned aircraft in real conditions within commercial air traffic space, which confirms the project’s readiness for commercial use.”

The HiDRON is a fixed wing glider integrated with meteorological equipment and launched by a stratospheric weather balloon filled with helium. With 3.4 m wingspan, the HiDRON weighs under 5 kg and is capable of carrying an in-situ measurement instrument weighing up to 1 kg. Data from the integrated instrument is transmitted via telemetry immediately and during the ascent into the stratosphere to a ground station, (much like a typical weather radiosonde). After reaching an altitude of 25 km, set by the ground station operator, the HiDRON disconnects from the balloon and glides back to the specified landing site. Changes to the flight plan can be made by the operator in real-time. To increase the flight duration, algorithms automatically process efficient flight controls to maintain optimal energy. Aircraft landing is fully automatic.

All operational parameters are transmitted via radio telemetry with a range of 100 km (66 mi.). An iridium satellite link provides a back-up communication system. Other safety features include a deployable parachute and a dual redundant balloon release system.

Stratodynamics would like to thank En Sci Environmental Science, InterMet, TruWeather Solutions and TempoQuest for their support of this project.