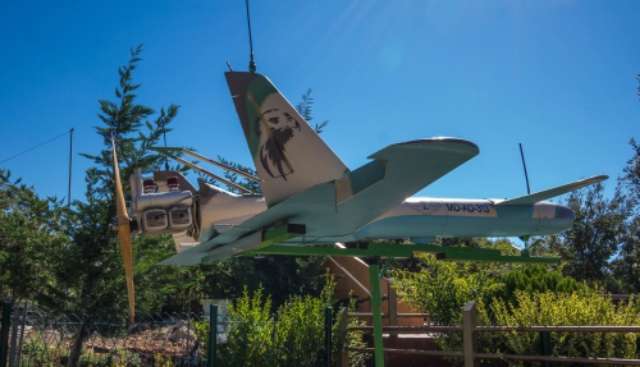 The Mleeta Resistance Tourist Landmark, also called the Mleeta Museum for Resistance Tourism, is widely referred to as the ‘Hezbollah Museum’. It now displays a ‘squadron’ of drones used by Hezbollah during the Zionist war against Lebanon in 2006 and during the anti-Islamic State campaign on the Lebanon-Syria border in 2017, some of them carrying the insignia of the so-called Hezbollah air force.‬

The museum is located in southern Lebanon, about 45 kilometres north of the border with Israel, and is run by the Lebanese Association for Tourism and Tradition.Both Hezbollah and Hamas have used drones – more properly known as unmanned aerial vehicles or remotely piloted air systems (UAVs or RPAS), in their operations against Israel. These have mainly been Iranian-supplied systems, and Hezbollah is understood to have worked alongside the Iranian Revolutionary Guard Corps at Iranian drone bases in Syria.

Hezbollah made its first recorded use of a drone in 2004, dispatching an Iranian Mirsad UAV on an 18-minute reconnaissance mission over Israel, before returning to Lebanon undetected.

Iranian-built drones were also used by Hezbollah during the 2006 war with Israel, though these UAVs all crashed or were shot down by the Israeli Air Force.

In October 2012, Hezbollah flew a more successful UAV reconnaissance mission to southern Israel – a distance of several hundred miles – over Gaza and the Negev Desert. The aircraft, an Iranian Shahed 129, was again shot down.
Hezbollah’s use of UAVs has developed and advanced since its involvement in the Syrian war (in which it has fought in support of the regime of Bashar al-Assad).

In 2014, Hezbollah launched its first successful armed drone attack against the headquarters of the Nusra Front near the Lebanese/Syrian border.Increasingly, Hezbollah has turned its attention to the use of commercial off-the-shelf micro drones, using these to drop grenades, IEDs and Chinese-made MZD-2 sub-munitions or ‘shrapnel bombs’. The MZD-2 typically contains an explosive charge, wrapped in tiny plastic or metal balls.