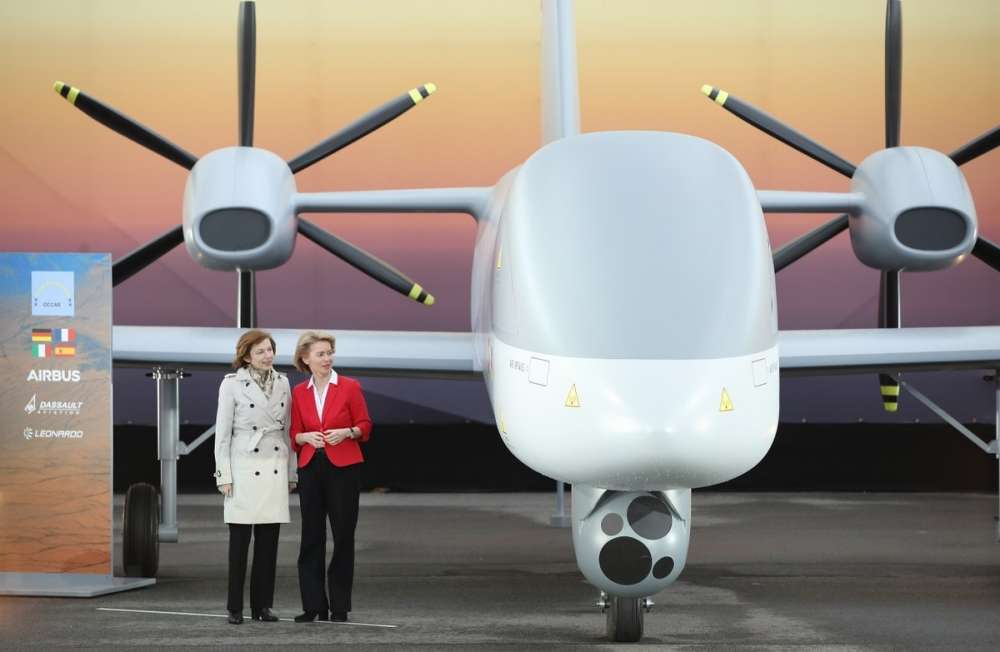 A study commissioned by the German government recommends considering U.S. technology in a quest to make the military “Eurodrone” safe to fly alongside civilian airliners, the Defence Ministry told lawmakers.

The recommendation comes from analysts at Munich-based IABG, a frequent supplier of engineering advice to the Bundeswehr, defense officials told the far-left Die Linke parliamentary faction in a Jan. 29 letter.

The government had tasked the contractor with thinking through the required steps to make the Eurodrone capable of flying in civilian airspace. That feature is a key requirement for the aircraft, co-developed by France, Germany, Italy and Spain.

Germany’s Airbus Defence and Space, France’s Dassault Aviation, and Italy’s Leonardo last year settled on a design for the drone, which is initially meant for surveillance, though it also will be able to carry weapons. The European multinational Organisation for Joint Armament Co-operation, or OCCAR, manages the program.

According to the German Defence Ministry, Airbus is expected to deliver a proposal and program strategy in April 2019, with a goal to begin serial production by 2025.

The list of options for obtaining collision-avoidance technology includes two scenarios involving American expertise: One is adopting relevant U.S. safety standards and designing a new European detect-and-avoid technology package based on those. The other is adopting U.S. standards plus existing American technology wholesale.

Developing a purely European solution from scratch is also among the options recommended to the government, according to the ministry’s letter to Die Linke.

“Due to the dynamic pace of technology and policy development in this area, the government believes it makes no sense to determine a concrete course of action at this point,” it added.

News that U.S. systems are in the running to supply detect-and-avoid systems for the European program is sure to make manufacturers on the continent nervous. Companies on both sides of the Atlantic are competing in a race to build the first collision-avoidance system certifiable by international air-safety regulators. So far, none exists that could be approved for the Eurodrone.

Germany’s Hensoldt is among the European companies looking to sell a detect-and-avoid radar system for use on the drone. The vendor recently announced that its engineers successfully tested the pre-prototype version of a radar system during test flights aboard a manned Dornier Do 228.

Germany’s Defence Ministry previously said it is eyeing detect-and-avoid technology provided under a planned acquisition of Northrop Grumman’s Triton drone. The U.S. Navy’s derivative of the Global Hawk is called “Pegasus” in Germany, which is short for “Persistent German Airborne Surveillance System.”

The ministry’s new missive to lawmakers came in response to a request made late last year by Andrej Hunko and fellow Linke members of parliament about the status of the Eurodrone. The questioners appear especially curious about IABG’s role in helping to define key performance parameters for the aircraft, particularly related to airworthiness in civilian airspace. According to the ministry’s letter, the contractor recommended outfitting the drone with a twin-turboprop propulsion system, a design feature that the developer nations ultimately adopted.

In a statement, Hunko criticized the plan of letting military unmanned aircraft mix with civilian traffic, arguing Germany and the European Union should stop developing combat-capable drones in the first place.

“It is scandalous how the government has elevated the aircraft into the status of a PESCO project,” Hunko said, referring to a list of European Union-backed defense initiatives meant to unify the existing plethora of military programs across the continent. “This is meant to bait other countries into participating.”

According to the Defence Ministry’s letter, officials plan to place the post-acquisition phase of the Eurodrone program under the auspices of the PESCO umbrella, meaning operations costs could be subsidized by common EU funds.