Shilat Optronics is an Israeli HiTech company specializing in electro-optics, which focuses on developing innovative technologies for defense and homeland security applications. The company is based on proprietary technologies and innovation.

The new development is based on an existing observation balloon developed by the company in the past and already in field operation. The balloon is equipped with an original camera payload with unique features designed to meet the special requirements of the balloon. As a static platform, the balloon requires a payload enabling observation over a wide area. The light-weight balloon payload is compact, and it enables long-range observation. 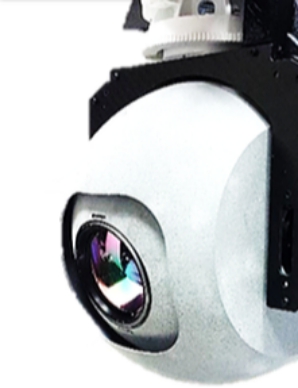 Recently, in response to a requirement from a security organization, the company developed a new payload based on the advantages of the balloon payload, for drone uses. The new development serves as a dual solution bridging the gap between the requirement for a detailed and accurate image at night and the need to refrain from being exposed.

World current solutions require a range of 500-600m from the target in order that the drone can see it. However, Shilat’s new payload recognizes the target almost the minute it takes off, thanks to its capability of person recognition from a 5km range. This becomes an operational advantage in situations where the operators want to refrain from getting closer to the target or being exposed. This payload is designed exactly for cases which require long-range vision without getting close to the target.

The cooled thermal camera supplies a high-quality and sensitive image. The innovation in this payload lies in its low weight – only 1.400 kg, even lighter than the balloon payload, and it can be mounted on any commercial drone capable of carrying this weight. While stabilized thermal payloads are usually heavy, this one is a low-weight compact payload with advanced stabilization. The cooled payload supplies a detailed night vision system which is much more stable than the ones offered in the commercial drone market.

The new drone payload draws from the unique capability of the original balloon payload to withstand balloon movement as a result of the wind.

In an interview to iHLS, Dr. Doron Shoham, CTO, Miki Buskila, VP Marketing, and Yuval Gadot, one of the project founders, emphasize that these capabilities in such a high performance/weight ratio are globally unprecedented. In the world market, there is no solution for a drone night observation capability for long ranges via such light-weight payload.
The new payload will be part of the balloon system or the drone as a multi-purpose payload for long endurance (balloon) or short endurance (drone), offering flexibility according to changing needs in the field. This flexible use of a drone with a balloon enables a rapid targeting via the balloon and direction by the drone.

According to Shoham, the development is designed for military and homeland security applications: border security, installation and infrastructure security, fire identification, natural disaster response, and more.