State Farm just announced that it has received “the first national waiver to any company in the U.S. by the Federal Aviation Administration (FAA)” for the operation of unmanned aircraft systems (UAS) or drones beyond visual line of sight (BVLOS) and over people. The waiver grants relief of certain FAA rules through 2022.

Previous waivers State Farm was granted were limited to a short time frame and to specific geographic areas impacted by hurricanes.

“It’s been a team effort to make drone technology a reality,” says Senior Vice President for P&C Claims Robert Yi. “The waiver will provide our claims specialists with another way to efficiently help customers. We can use drones to assess on-the-ground damage and deploy resources. This is a huge win for our customers and demonstrates we’re recognized as a leader in drone technology.”

Current FAA regulations restrict pilots from flying drones beyond their visual line of sight and over groups of people. In a catastrophe situation, access to the impacted area may be challenged by water, debris and damage to infrastructure. The national waiver will also open up new innovation opportunities for State Farm by allowing longer-distance flights.

“There are many possibilities for the use of drones but FAA regulators need to be assured that operations can be conducted safely” said Mark Blanks, Director for the Mid-Atlantic Aviation Partnership (MAAP) at Virginia Tech. “State Farm had a compelling proposal for how drones could improve their customer experience and an unwavering commitment to safety. MAAP had the operational expertise and the research experience to help them navigate the approval process and collect supporting data. This success shows how powerful it can be when industry and academia collaborate to break new ground.”

For nearly two years, State Farm has been working with the Mid-Atlantic Aviation Partnership (MAAP) at Virginia Tech on drone safety case research. In May 2018, the Commonwealth of Virginia was selected as one of 10 teams selected to be part of the FAA Integration Pilot Program (IPP). As a member of the Virginia IPP team, State Farm has worked with MAAP to assess a wide range of potential risks and strategies for reducing them.

“I’m proud of the teamwork demonstrated in making a nationwide waiver a reality at State Farm,” says Mark Oakley, Senior Vice President for Labs @ State Farm. “The partnership between Claims, Labs and Virginia Tech has been integral in getting us to this point. As the first and only company to secure a nationwide waiver to date, this is a substantial achievement and testament to the skills, knowledge, passion and commitment of these teams. We strongly believe the waivers provide us with the ability to explore new and exciting opportunities for State Farm.”

State Farm and MAAP have conducted numerous tests that evaluated the fixed-wing eBee Classic drone, manufactured by senseFly, for longer-distance damage assessment flights. Based on the strength of the research and resulting safety case documentation, the FAA approved temporary waivers for State Farm to conduct damage-assessment drone flights over people and beyond the operator’s visual line of sight in states impacted by Hurricanes Florence and Michael. Successful flights in the aftermath of the two hurricanes yielded valuable real-world experience and insights that were incorporated into the national waiver request.

There are some nuances in State Farm’s FAA Waiver that are important to note.

First, the use of a Visual Observor (VO) is not completely waived. There is a stipulation that “at least one VO” must be used, though they “may not be able to see the unmanned aircraft” throughout the entire flight.

Second, there is a requirement for a Notice to Airmen to be filed: “Not less than 24 hours prior to conducting operations that are the subject of this Waiver, a Notice to Airmen (NOTAM) must be filed. The NOTAM must include location, altitude, and/or operating area, time and nature of the activity.”

Third, the waiver applies for only operations “with the make and model [small UAS] described in the waiver application”, meaning they cannot substitute different types of drones to operate under this waiver, unless they specifically included them in the waiver request.

There is no doubt that this is a significant milestone for the integration of UAS into the National Airspace System and that State Farm deserves accolades for its achievement. Industry is hopeful that similar waivers will be granted for other commercial UAS operations, and that such waivers will become commonplace. Anticipated rulemakings for UAS remote identification, and UAS operations over people, are on tap for the first part of 2019. However, as we enter day 21 of the partial government shutdown, which includes the FAA, it is unclear if those announcements will stay on track. 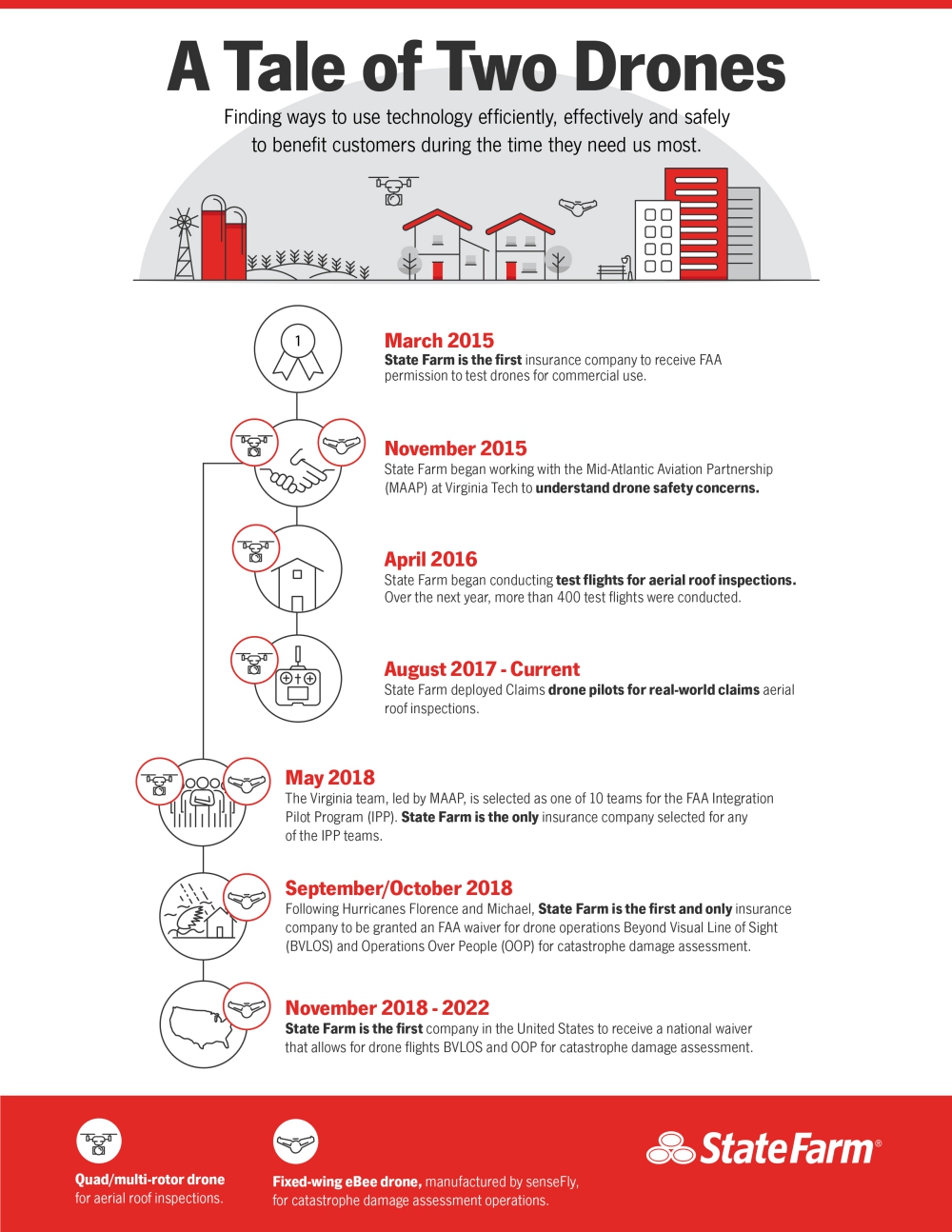